Risking it all for Human Rights 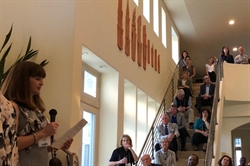 Collectively, we risked nothing in attending tonight's event - in coming together to advocate for others.

People around the world risk everything.

In July, Julianne and I attended a conference in Zagreb, the capital and largest city in Croatia. The conference was called by The Advocates for Human Rights. We were part of a team of 7 volunteers, trained by The Advocates, and assigned to collect the stories of 31 human rights defenders from 17 countries.

The first morning, we gathered in the hotel conference room at 8 a.m. Our first task was to find a coffee tin … to block cell phone signals.

Some participants worried their cell phones had been compromised, participants like Hanna from a Central European country. When her 8-year-old mobile phone was stolen during a lunch break, Hanna contacted her sister to let her know she was safe. She then activated her safety protocol to ensure that her phone was not compromised.

With the tin can secured, Julianne and I opened the conference with a talking circle. Our job was to quickly establish an environment of safety and trust-so people would share their stories.

As they did, a terrifying pattern emerged: the rise of populism and the radical right have fueled violence against women, the LGBT community and immigrants across the globe.

What is as terrifying as the violence itself is this fact:

Violence. Discrimination. Human Rights Abuses. They are a tactic in a larger geopolitical effort to ensure that powerful global business interests have their candidates in elected positions of power.

Our new friends from Italy, Austria, Belarus, Serbia, Bulgaria, Russia, and Ukraine cited examples of extremist candidates elected by inciting fear of immigrants, of losing their "native" cultures, of ceding to gender politics.

The right is well organized, disciplined and well-coordinated … around the globe.

The right is a force we need to match, and The Advocates for Human Rights is on the forefront of that battle. With more than 20 years of experience in working with women's groups in Europe, providing advocacy, legal training, and research, The Advocates is a trusted partner. They have a proven track record of leveraging skilled volunteers and building local capacity for action.

Rose and her team had prepared us well.

The conference galvanized the participants. They vowed to support one another, to reclaim human rights tools for rapid response to defend against false information and media attacks. To train lawyers, work with police and prosecutors, to learn effective communications strategies, to share resources and continue to meet-no matter the risks.

Two weeks after I returned home, I was sitting in my car, waiting for my kids to finish practice, thinking about what to make for dinner, what work I needed to finish. I picked up my phone and scrolled through the headlines.

In my news feed, was my new friend, Svetlana, an LGBT advocate in Russia whom I had met at the conference in Croatia.

Svetlana was speaking about her colleague, Yelena Grigoryeva, a well-known LGBT activist in Russia. Yelena had been found stabbed to death-murdered-outside her St. Petersburg apartment.

Days earlier, Yelena had gone to the police to report that she was on a "Gay Kill List."

Just this past week, Svetlana, was in the news again. She and her colleagues in the Russian LBGT community were imploring the police and the ministry of internal affairs to solve Yelena's murder-to find the people behind the Gay Hit List, a list published by an anonymous online group called Saw, after the American cult horror film. Saw continues their assault, offering cash for murders-and telling LBGT activists that unless they murder their own colleagues, they themselves will be killed.

Julianne and I don't want to lose another friend, which is why we teamed up today to ask for your help.

Help people who are risking it all. Support The Advocates for Human Rights at TheAdvocatesForHumanRights.org/donate.

Gretchen Piper is a volunteer with The Advocates for Human Rights and President of Gretchen Piper, LLC, a consulting firm focusing on strategic planning, fund raising, and marketing.