The Fight Against the Death Penalty Continues 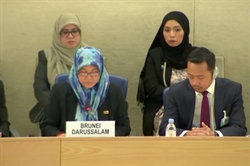 In May 2019, the United Nations Human Rights Council held its 33rd session of the Universal Periodic Review (UPR), as part of the third cycle of the review process. The UPR examines the status and progress of human rights in all 193 member countries of the United Nations. (For more information about the UPR, check out Chapter 9 of Human Rights Tool for a Changing World here.) Among other countries, both the Democratic Republic of Congo (DRC) and Brunei Darussalam received recommendations to further their progress toward abolishing the death penalty.

Both countries have a de facto moratorium on the death penalty. Brunei has had no reported executions since 1957, and the DRC has had the moratorium since 2003. But neither country has ratified the Second Optional Protocol to the International Covenant on Civil and Political Rights to officially move toward abolition of the death penalty. Even though international human rights standards mandate that countries retaining the death penalty must reserve it for only the most serious crimes, Brunei continues to sentence people by hanging for far less.

Under the Syariah Penal Code, adultery, sodomy, rape, apostasy, blasphemy, and insulting Islam are all punishable by death by stoning in Brunei. In the DRC, the administration of the death penalty lacks transparency. Just last year, the government handed down 41 death sentences.

At the Universal Periodic Review

A Lack of Progress?

After taking months to examine the recommendations from May, last month both Brunei Darussalam and the DRC "noted" all the recommendations relevant to the death penalty. In the language of the UN, noted means rejected. Both countries cited their respective sovereignty over the issue as the reason for rejecting the recommendations. Brunei Darussalam used the country's religious background to justify the current use the death penalty in the Penal Code. Many countries and organizations, including Belgium and the UK, urged the government of Brunei to reconsider its decision. Similarly, a representative of the government of the DRC told the Human Rights Council that the nation's own parliament should make the final decision on the death penalty. A delegate from Germany, however, urged the DRC to ratify the Second Protocol.

Despite noting these recommendations in the official meeting, the Brunei government took a small step forward. On May 6, the Brunei government announced that it would extend its moratorium on capital punishment to the crimes of homosexuality and adultery. Under laws that had taken effect in April, the two crimes would otherwise have been eligible for the death sentence of stoning. Furthermore, a representative from the government of Brunei told the Human Rights Council that the government had been making progress toward ratifying the Convention Against Torture. Many governments and non-governmental organizations welcomed this move.

This small victory, however, should not overshadow the larger picture. Despite overall progress toward abolition of the death penalty, many countries' practices are far removed from international human rights standards. The cases of Brunei Darussalam and the DRC signal the difficulty ahead. The Advocates will continue to fight for a humane justice system on an international level.

To learn more about the death penalty, please visit our website here. Also, October 10 is the 2019 World Day against the Death Penalty, and encourage you to get involved.

To watch the full videos of the September 2019 meetings of the Human Rights Council adopting the outcomes of the UPRs of Brunei and the DRC, please visit the links below:

The Democratic Republic of Congo

By: Yunze Wang, an intern with the International Justice Program at The Advocates for Human Rights and a student at Macalester College.