Advocates for Indigenous and Minority Rights 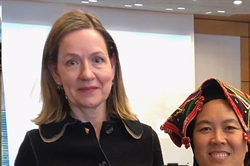 The Advocates for Human Rights recently sent a delegation to the United Nations Office at Geneva. In addition to staff and volunteers, our delegation included representatives of partner organizations advocating for indigenous and minority rights. The Advocates partnered with The Tai Studies Center to draw attention to the discrimination and violence experienced by the Tai indigenous people in Vietnam. With diaspora-based United Oromo Voices, The Advocates submitted a report on ethnic minorities in Ethiopia for consideration as part of Ethiopia’s Universal Periodic Review by the UN Human Rights Council.

While in Geneva, our delegation participated in the discussion around the Special Rapporteur on Minority Rights’ report to the UN Human Rights Council. The agenda for this meeting was focused on the Special Rapporteur’s country visits this past year to Botswana and Slovenia, and the issues minorities face there. The Advocates highlighted for the Special Rapporteur and the Council members that minorities face similar issues in Vietnam and Ethiopia. As a non-governmental organization with Special Consultative status, The Advocates can participate in interactive dialogues by making oral statements at the Human Rights Council. These two-minute statements are our opportunity to share our concerns with the Council, and they are recorded and published afterward on the UN website. Nagessa Dube from United Oromo Voices made the oral statement on behalf of The Advocates for Human Rights.

As an intern, I helped draft the oral statement on minority rights. Through the drafting process, I had the opportunity to learn more about the obstacles and harassment encountered by indigenous and ethnic minorities within these countries. Although these human rights issues are ongoing and The Advocates continues to receive reports of abuses from our clients, they are often forgotten by global media attention.

Here's what we must continue to pay attention to:

In Vietnam, the government refuses to acknowledge the Tai people's indigenous status and right to self-determination. Along with other local indigenous groups, they face barriers to land management and the state denies them adequate compensation for the resulting damage to their livelihoods. They struggle against cycles of poverty, discrimination from the majority community, and limited access to public services, electricity, and water. The Vietnamese government continues to confiscate land from indigenous groups; the Tai and other groups' lands in Highlands' villages have been confiscated without full compensation for state economic development projects. The government arbitrarily detains and disappears members of indigenous groups, and suppresses protesters by using national security provisions to claim that potential ties of indigenous groups to organizations abroad promote so-called "separatist aims."

In Ethiopia, the state has continually subjected members of the minority Ogaden and Oromo communities to the arbitrary confiscation of land and ethnic persecution since the beginning of Ethiopian rule over the Somali region in 1948. In November 2015, large scale protests began in Oromia in opposition to the Addis Ababa Master Plan, which intended to forcibly displace the minority Oromos from their homes in favor of expansion of the territory of the capital city. Various Advocates clients interviewed reported that many Oromo people were injured and killed during the 2015 Irreechaa protests after security forces fired into crowds. Many of those who survived the massacre were taken into government custody. The Government of Ethiopia continues to subject minority populations to violence and arbitrary arrests.

I was excited to watch the delegation present our concerns to the Special Rapporteur in Geneva over the UN WebTV from my Minneapolis desk. It was rewarding to know that for those two minutes, our advocacy held the attention of the Special Rapporteur and the entire Human Rights Council. Afterward, the delegation facilitated a side event for both Vietnam and Ethiopia minority rights. The side event allowed both representatives more time to educate and advocate for the issues that minorities in these countries face.  Furthermore, it allowed representatives of many minority groups to build solidarity, highlighting the similarities of indigenous minority struggles all across the world.

I talked to The Advocates' partners who participated in the delegation about their experiences advocating for indigenous and minority rights at the United Nations.

Samone Khouangsathiene with The Tai Studies Center reflected that "regardless of which country or which indigenous group we are from, we all have similar human rights violations occurring.  Indigenous people are being marginalized and even decimated by ruling governments around the world." However, by the end of the event she left with a sense of hope:

"Through my attendance I put Tai Dam concerns front and center not only to the Human Rights Committee but to the Vietnamese delegation. This "face to face" showed the delegation that the Tai Dam backed by the UN holds the government accountable. The Tai Dam are no longer voiceless."

Nagessa Dube from United Oromo Voices had a similar perspective. He appreciated the opportunity to develop connections and build relationships with different advocates and organizations in attendance. He hopes that the outcome of his time in Geneva will encourage the government of Ethiopia to listen to the recommendations of The Advocates by halting human rights violations against indigenous communities and committing to reparations for past damages.