Seeing signs of progress for LGBTI rights in Côte d’Ivoire 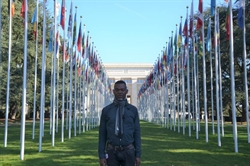 Today is the International Day Against Homophobia, Transphobia, and Biphobia, or IDAHOT. Today at The Advocates we take stock of our progress over the past year to advance LGBTI rights and what lies ahead.

One highlight of the past year was working with Alternative Côte d'Ivoire https://www.facebook.com/alternativeci.infosbranches, an Ivoirian non-governmental organization committed to the fight for the rights of sexual minorities and to combatting HIV/AIDS. We first connected with Alternative CI after they prepared a stakeholder report for the 3rd Universal Periodic Review of Cote d'Ivoire. They were eager to learn what they should do with the report.

Lobbying at the United Nations

Starting in November 2018, we collaborated with Alternative CI to condense their report into a "one-pager" to use for lobbing, identified dozens of countries to target for our lobbying efforts, and provided them with advice about approaching embassies in Abidjan to seek their support.

In March, Philippe from Alternative CI was able to join us and our team of volunteers in Geneva to continue that advocacy. He participated in our half-day training and then hit the ground running, reaching out to delegates to the UN Human Rights Council and participating in meetings to share what is happening on the ground in the country.

As Alternative CI highlighted in its stakeholder report, even though LGBT status or conduct is not criminalized, people face discrimination and violence based on sexual orientation and gender identity. This violence and discrimination comes from private parties as well as officials, including police officers and health care workers.

Philippe joined our partners from United Oromo Voices and Human Rights in Democracy Center (Albania) to present in a parallel event during the Council session. Several government representatives attended the event to learn more about the types of recommendations Alternative Côte d'Ivoire would like them to make during the UPR's interactive dialogue.

Just last week, we had the chance to witness the fruits of Philippe's hard work. The Council held its interactive dialogue with representatives of the government of Côte d'Ivoire on Tuesday, May 7. During the interactive dialogue, 101 countries offered a total of 251 recommendations to Côte d'Ivoire. Nine countries we lobbied-Argentina, Australia, Chile, the Czech Republic, Germany, Iceland, Ireland, the Netherlands, and the United States-made recommendations specifically addressing LGBTI rights. It was a huge victory. By way of comparison, during Côte d'Ivoire's 2nd UPR in 2014, just 3 countries raised the issue of LGBTI rights.

Tripling the number of recommendations turned up the heat on the government. During the interactive dialogue, the Ivoirian government felt compelled to respond. The head of the delegation stated, "Our position is unchanged since our previous UPR, and therefore no measures have been taken or are intended to be taken regarding LGBT individuals. But our legislation does not make sexual orientation subject to punishment." It was a big step, however, for the government even to speak those words at the Human Rights Council. In 2014, the government delegation was completely silent on the issue.

As part of the UPR process, all of the recommendations from the interactive dialogue are transcribed and compiled into an official document called the Report of the Working Group https://www.theadvocatesforhumanrights.org/uploads/cote_divoire_upr_2019_report_of_working_group.pdf. The Office of the High Commissioner for Human Rights publishes those recommendations two days after the interactive dialogue, and then the government has approximately 4 months to respond to each recommendation. For each recommendation, governments have two options: accept or "note" (reject).

It became clear that the Ivoirian government didn't even read the nine recommendations. It simply rejected any recommendation that referenced sexual orientation, gender identity, or the acronym LGBTI. Even Cameroon-a country that criminalizes consensual same-sex conduct and actively prosecutes people on suspicion they are LGBT- had accepted a recommendation from Belgium to "investigate police violence that took place on persons because of their actual or perceived gender identity."

We had lobbied for training for police officers and health care workers on LGBTI rights. Perhaps Alternative CI can get involved in these trainings and ensure that they include some lessons on LGBTI rights.

On this IDAHOT, we are looking forward to a future in Côte d'Ivoire and throughout the world where governments take seriously their obligation to respect, protect, and fulfill the rights of LGBTI persons. We're looking forward to collaborating with Alternative Cote d'Ivoire on an alternative report on the rights of lesbians, bisexual women and trans women for the upcoming review of Côte d'Ivoire by the Committee on the Elimination of Discrimination Against Women. And we will persist in pressing the Ivoirian government to uphold its obligations under international human rights treaties to protect people from violence and discrimination based on sexual orientation and gender identity. We're in it for the long haul, and with hard-working partners like Alternative Côte d'Ivoire, we know that we will see results.

To learn more about The Advocates' work on LGBTI rights, click here: http://www.theadvocatesforhumanrights.org/lgbti_rights

If your organization would like to collaborate with The Advocates on UN advocacy or other projects, fill out this form: https://www.theadvocatesforhumanrights.org/partner