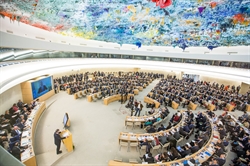 Since 2014, a growing number of women and children fleeing gender-based violence in Guatemala have requested legal assistance from The Advocates in applying for asylum in the United States. Using information from interviews with these clients, The Advocates documented violence against women in Guatemala and submitted a stakeholder report to the United Nations Human Rights Council for consideration during Guatemala’s third-cycle Universal Periodic Review, which took place on November 8, 2017.

Due to lack of protection and high rates of impunity, many women choose to leave the country rather than face potential reprisals and stigma. Domestic violence is also a significant push factor for unaccompanied child migrants.

The Advocates is able to help these women and children in two important ways: providing legal assistance in their asylum cases and using their experiences to advocate at the United Nations for law and policy changes in their home country of Guatemala.

There are several steps involved in bringing these individual stories to an international stage.

First, The Advocates drafted a report documenting violence against women in Guatemala, based on research on country conditions and client interviews. The Advocates submitted this stakeholder report to the Human Rights Council for consideration during Guatemala’s Universal Periodic Review. After the report was complete, I drafted a two-page summary that outlined the key information and suggested recommendations. I then reviewed countries that made recommendations to Guatemala during its second UPR in 2012, and selected 27 countries to lobby based on their past support for eliminating gender-based violence. I emailed these countries, thanking them for their interest in women’s issues and updating them on the status of past recommendations they made to Guatemala. I sent them the full report on Guatemala as well as the summary document.

The purpose of lobbying other countries is twofold— to alert the country to the dire situation in Guatemala and to provide suggested recommendations based on our report. The country under review must acknowledge the recommendations, which can serve as a rebuke for missteps as well as a blueprint for areas to improve.

For example, Guatemala received and accepted recommendations during its second-cycle UPR in 2012 to strengthen the 2008 Law Against Femicide. In order to implement these recommendations, the government established several agencies and institutions to give effect to the law, and created lower level courts. Yet weak implementation of these tools meant there was little reduction in levels of violence against women. In addition, there is no law against sexual harassment, despite its ubiquity. The partial implementation of these 2012 recommendations speaks to the importance of creating targeted recommendations, the success of which can be measured on a defined timeline.

I was pleased to see the following recommendation from Spain, a country we targeted with our lobbying:

It’s incredibly powerful to see this recommendation and other calls to action that grew out of The Advocates’ client testimonies.

Guatemala accepted 28 of the 31 VAW-specific recommendations and will have five years before its next review to work on implementing them. I hope, the country will continue to build on past work and use the recommendations made during this review to effect meaningful change.

This post is the second in a series on The Advocates’ international advocacy. The series highlights The Advocates work with partners to bring human rights issues in multiple countries to the attention of the United Nations Human Rights Council through the Universal Periodic Review mechanism. Additional post in the series include: