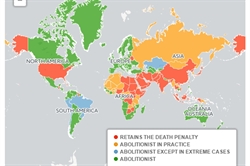 Japan is one out of the fifty eight countries (including the United States) where the death penalty is still legal and actively carried out. In Japan, crimes punishable by execution include murder, terrorism, arson, and treason. Based on reports from the Japan Innocence & Death Penalty Information Center, 106 people have been executed since 1993, and as of November 2017, 126 people are currently on death row.

Hanging is the main method of execution in Japan, and is carried out in an isolated penal institution. The Japanese Government severely restricts people on death row from having contact with the outside world. Within the detention center, the communication of people on death row is strictly limited; only lawyers and close relatives are allowed to visit death row inmates. Furthermore, people sentenced to death are informed of their impending execution only on the morning of the execution. The Japanese government insists that such last-minute notification inflicts less psychological pain on people sentenced to death.

After learning of the death penalty policies and practices in Japan, we wanted to see how advocacy against the death penalty from various sources (civil society, states, stakeholders, etc.) could make a tangible impact. These issues regarding Japan's death penalty and prison conditions have prompted criticism from domestic and international human rights organizations. A systematic mechanism for the organizations to raise these concerns is the Universal Periodic Review (UPR) process at the United Nations' Human Rights Council.

The Universal Periodic Review: What is it?

Every four and a half years, countries are required to undergo a Universal Periodic Review by the Human Rights Council. All UN member states - 193 countries in total - are required to participate in the UPR process, whereby they are subjected to review by the United Nations and are given the opportunity to report their progress on human rights issues and to receive and respond to recommendations from other countries.

The UPR process is structured in a way that allows for feedback from the state under review, as well as from on-the-ground non-governmental organizations (NGOs). NGOs and National Human Rights Institutions (NHRIs) can submit stakeholder reports with firsthand accounts of the government's failure to respect human rights. These stakeholder reports ensure that the Human Rights Council gets an accurate, well-rounded picture of the human rights situation in the state under review before the UPR's "interactive dialogue."

The Advocates' UPR lobbying pays off

The Advocates for Human Rights works with other stakeholders to research and submit reports for consideration in the UPR process. Once the reports are submitted, The Advocates continues its efforts by contacting delegations of other UN member countries and lobbying them to make recommendations to the country under review. This lobbying can be done in person or via email. Oftentimes, these recommendations pertain to a single issue. The Advocates' lobbying process for the November 2017 UPR of Japan provides a window into this type of UPR advocacy.

In preparation for the 28th Session of the Universal Periodic Review, The Advocates submitted a stakeholder report in conjunction with The Center for Prisoners' Rights in Japan and The World Coalition Against the Death Penalty. (Readers can access the full report on The Advocates' website.) After submitting the stakeholder report, The Advocates reached out to several country representatives to raise its concerns on the issue of the death penalty in Japan.

Beyond these twenty states, other representatives also made recommendations about the death penalty, echoing one or more of The Advocates' recommendations. In total, 42 out of the 105 country representatives - a whopping 40% - participating in Japan's UPR addressed the death penalty, demonstrating the strong international pressure for change in the country's legal system.

In a closing statement at the UPR session, Mr. Yoshifumi Okamura and other representatives from the Japanese Government responded to the recommendations offered by other UN member countries. The Japanese delegates asserted the use of the death penalty in Japan is "unavoidable" and an immediate moratorium on the death penalty would be "inhumane" to the prisoners currently on death row, because such an act would arouse their hopes for abolition of the death penalty. The delegation rejected recommendations to convert death sentences to life imprisonment, asserting that a life sentence is a "very harsh punishment" and expressing great concern that the "character of the inmate will be destroyed due to prolonged confinement."

Perhaps the most puzzling response from the Japanese Government was on the issue of notifying death row inmates of their execution on the morning on the execution. Government representatives asserted that an "inmate's mental and psychological stability could be undermined and pain could be inflicted upon [them] if [they] were to inform about execution before the day of the execution." As The Advocates' noted in its report, the daily stress of not knowing the date of an impending execution certainly does even more to undermine the inmate's mental and psychological stability.

After viewing the entire UPR session, we see that Japan is making strides in many areas of its human rights practices and policies. But progress in some areas does not erase the injustice of the continued practice of the death penalty and poor detention conditions. At the adoption of the Universal Periodic Review Working Group report, Mr. Yoshifumi Okamura stated: "There is no end to the promotion and protection of human rights." The death penalty violates the most fundamental human right: the right to one's own life. We hope Japan and the fifty seven other countries that actively the death penalty soon realize that this right is fundamental and act accordingly.

This post is the first in a series on The Advocates’ international advocacy. The series highlights The Advocates’ work with partners to bring human rights issues in multiple countries to the attention of the United Nations Human Rights Council through the Universal Periodic Review mechanism. Additional post in the series include: