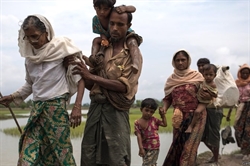 In July, the New York Times reported that a prominent, former Thai general had been sentenced to nearly three decades in prison for conspiring in the trafficking of Bangladeshi and Burmese Rohingya, a minority, stateless ethnic group fleeing persecution in Myanmar. Dozens more, including police officers and smugglers, were also convicted of participating in the human trafficking ring after the discovery of several mass graves thought to contain the bodies of migrants were discovered in 2015 near the Thai-Malaysia border, along a route often used to smuggle Rohingya out of Myanmar. The crackdown on trafficking has increased since the mass graves were discovered; this is only one of many Thai authorities that has been caught or suspected of colluding in the trafficking of refugees.

The Rohingya are a Muslim, ethnic minority residing in the Rakhine state of Myanmar and Bangladesh. Increasing abuse, persecution, and displacement has forced the Rohingya to flee to neighboring countries; according to a recent report by the United Nations High Commissioner for Refugees, more than 168,000 Rohingya are estimated to have fled the country in the last five years. Although the Rohingya have lived in Myanmar for generations, the 1982 Citizenship Law has consistently been used by the government to deny citizenship to hundreds of thousands of Rohingya, despite recent calls by human rights organizations and the UN General Assembly in 2014 to amend the legislation. The Citizenship Law effectively renders the Rohingya stateless, and it is this stateless status which makes it particularly difficult for the Rohingya to obtain legal status in any other country.

Thailand has consistently been a common destination and transit country for many refugees. However, the Thai government does not recognize the Rohingya as refugees, and therefore does not offer them protection. In fact, Thailand has not yet ratified the 1951 Refugee Convention or its 1967 Protocol, is not a signatory to the 1954 Convention relating to the Status of Stateless Persons, and has no formal national refugee legislation, so all migrants, whether refugee or non-refugee, are processed under the Immigration Act of 1979.

Thus, the Thai government treats asylum seekers as illegal migrants, and arrests and deports them as such. Thai law allows for police to arrest, detain, and fine people who have migrated illegally, even if they are children; because many refugees, particularly the stateless Rohingya, are not able to obtain legal status in Thailand under the Immigration Act of 1979, they are very likely to be subject to abuse by employers and human traffickers or to indefinite detention, abuse, and refoulement by Thai officials, even when the U.N. has recognized their refugee status. In fact, since 2004, the Thai government has not even allowed the United Nations High Commissioner for Refugees (UNHCR) to conduct screenings on Rohingya to determine refugee status.

This lack of protection, from either Thailand, other ASEAN countries, or the UNHCR within Thailand, puts the Rohingya at great risk of trafficking. The struggles of the Rohingya were put under the spotlight in May of 2015, when images emerged of overcrowded boats carrying hundreds of Rohingya from Bangladesh and Myanmar, adrift in the Andaman Sea between Thailand and Malaysia. The migrants had paid smugglers to take them out of Bangladesh and Myanmar, but due to Thailand’s recent crackdown on trafficking, these smugglers soon abandoned the migrants. When their boats neared the shores of Malaysia and Thailand, the refugees were turned away and pushed farther out to sea by authorities, where many perished due to exposure and lack of food and water. Survivors reported suffering horrific abuse at the hands of the traffickers, who beat, killed, and deprived migrants in order to force their families to pay a ransom.

Had they managed to arrive in Thailand, they likely wouldn’t have endured a fate much better. Once they reach the mainland, many migrants are sold by their smugglers to other traffickers, who then hold them in camps along the borders of Thailand. Here, they endure equally gruesome conditions and beatings; in May 2015, Rohingya in camps along the Thailand-Malaysia border were found being held in extremely overcrowded spaces, and even in pens and cages.

Even upon rescue from these camps, migrants are not safe. Because of Thailand’s treatment of refugees as illegal immigrants, refugees found in camps are generally arrested and placed in indefinite detention. Within immigration detention centers, migrants are subject to further abuse by Thai police and officials, who, like traffickers, often beat and harass detainees in order to obtain payment, and sometimes force them to return to Myanmar, an act which violates the international principle of non-refoulement. Further, detention officers sometimes even sell refugees back to the trafficking rings they were rescued from.

Thailand has taken steps in the last decade to combat human trafficking in the country, such as passing a law in 2008 which criminalizes trafficking and details punishments for perpetrators, including imprisonment and fines, and a more recent law in 2016 which expedites the judicial process for trafficking cases. Nonetheless, problems such as inadequate identification procedures for victims of trafficking, low rates of trafficking prosecutions and convictions, and most importantly, Thai official complicity in trafficking persist.

In its 2016 Universal Periodic Review, Thailand received eight recommendations from other state delegations relating to refugees and asylum seekers. It rejected almost all of these recommendations, including those which requested that Thailand offer legal status to refugees and asylum-seekers and that it put an end to arbitrary detention and refoulement of refugees, especially children. In its report, Thailand noted that despite not being party to the international treaties regarding refugees, the country has a “humanitarian tradition” of providing assistance to displaced people. Despite Thailand’s very recent push to prosecute traffickers, the state’s clear involvement in the trafficking and abuse of such displaced people and its refusal to conduct refugee screenings on them would suggest otherwise.

In order to truly demonstrate its commitment and “humanitarian tradition” of helping refugees, Thailand must immediately halt the return of Rohingya refugees to Myanmar, ratify international treaties relating to refugees and proceed with the investigation and prosecution of those responsible for the egregious human rights violations of migrants.

By Abby Walker, a junior at Carleton College (class of 2019) in Northfield, Minnesota studying sociology, anthropology, and education. She was a 2017 summer intern with The Advocates’ International Justice Program.