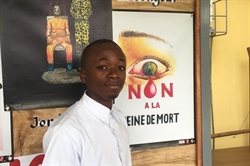 Today, October 10, is the World Day Against the Death Penalty. I am thinking back to a conference I attended in Kinshasa, Democratic Republic of the Congo, just a few weeks ago, on strategies for abolishing the death penalty. The conference, in partnership with Together Against the Death Penalty (ECPM), included two full days of presentations, discussions, and exhibitions. ECPM invited me to lead workshops on the Human Rights Council’s Universal Periodic Review and on conducting fact-finding to document conditions on death row in the DRC.

I found one part of the conference to be particularly powerful. As part of ECPM’s “Draw Me the Abolition” project, students around the world submitted illustrations of their conceptions of the death penalty. Four Congolese finalists were awarded diplomas at the conference and we were able to see all of the winning artwork on display. Their illustrations serve as a powerful testament to the harsh realities of the death penalty.

Below are some of the Congolese finalists and their extraordinary artwork, along with other winning posters. The illustrations, rife with pain, are indicative of the injustice of the death penalty.