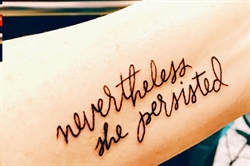 Go back to your quarters… Speech will be the business of men, all men, and of me most of all, for mine is the power in the household.

The role of women in society has clearly progressed since the days of Homer. Indeed, women now comprise 20% of the seats in the US Congress – holding 21 seats in the US Senate and 84 seats in the House of Representatives. Given this progress, you would hope that the days of men trying to publicly silence would be over. You would especially hope that the efforts to silence women wouldn’t happen in the US Senate to powerful and accomplished women like Senators Elizabeth Warren and Kamala Harris. You would hope that these women would be allowed to speak – and not be subjected to different standards than their male peers. But, that is not what happened earlier this year. It is bad enough when ordinary women are silenced – but, the efforts to silence these powerful women sends a troubling message to the girls of my generation.

In February 2017, by a vote of 49 to 43, Senate Republicans voted to formally silence Elizabeth Warren, a Democratic senator from Massachusetts, during the debate over Jeff Sessions’ nomination for Attorney General. Senator Warren had tried to read into the record a letter written by Coretta Scott King objecting to President Reagan’s nomination of Sessions to the federal courts back in 1986. In her letter, King said that Sessions used “the awesome power of his office to chill the free exercise of the vote by black citizens.” Senate Majority Leader Mitch McConnell said that Warren had “impugned the motives and conduct of our colleague from Alabama.”

Senator McConnell then invoked Senate Rule 19 – a Senate rule that allows the presiding officer to enforce standards of decorum on the Senate floor (“No Senator in debate shall, directly or indirectly, by any form of words impute to another Senator or to other Senators any conduct or motive unworthy or unbecoming a Senator”) – to stop Senator Warren from speaking. He then famously said:

She was warned. She was given an explanation. Nevertheless, she persisted.

What stands out about Senator McConnell’s efforts is the rule used to silence Senator Warren has rarely been invoked since its creation was prompted in 1902 after a fistfight erupted on the Senate floor. It is hard to imagine that Senator Warren’s comments were more egregious than words spoken by men on the Senate floor over the years. Was it worse than when in 2015 Senator Ted Cruz accused Senator McConnell of lying? In fact, Bernie Sanders, only a few hours later, read the same letter and was able to finish without interruption.

In early June, two senators interrupted Senator Kamala Harris while she was in the midst of questioning Deputy Attorney Rod Rosenstein with respect to the independence that would be given to Special Counsel Mueller. She had limited time – and was seeking a yes or no answer to what she thought was a straightforward question. She was interrupted for not providing the witness with the “courtesy” for all questions to be answered. As the former Attorney General of California, Senator Harris is an experienced litigator. Some observers have argued that she was held to a different standard then many using the same questioning techniques.

This kind of silencing has not just happened to American politicians. Back in 2011 in the UK, Prime Minister David Cameron, told Angela Eagle, a Member of Parliament to “calm down dear” as she was trying to make a point during a debate in the House of Commons. Attacking Mr. Cameron’s “patronizing and outdated attitude to women,” MP Harriet Harman noted: “Women in Britain in the 21st century do not expect to be told to ‘calm down dear’ by their prime minister.”

The good news is that, unlike in the times of Homer, the silencing of these women politicians has not gone unnoticed. Even girls my age are taken aback at what we see as men applying different standards to women. However, we are even more heartened by the reaction as people across the country spoke up noting the inequality. Plus, we are heartened by the fact that neither Senator Warren nor Senator Harris wilted at their silencing. They just continued to speak up using other channels.

The other day I saw a baby onesie with the phrase “Nevertheless, She Persisted” emblazoned on the front. Senator McConnell’s words have become a rallying cry for women and even baby girls. I wonder if Senator McConnell wishes he had just let Senator Warren speak.

By The Advocates for Human Rights’ youth blogger Jenna Schulman. Jenna is a high school student in Washington, D.C.