All students deserve safe and equal access to education 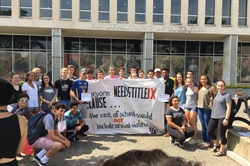 On July 13, Education Secretary Betsy Devos began her first steps in re-evaluating the Obama-era policies regarding sexual assault and consent on college campuses by engaging in a series of “listening sessions” for various groups impacted by Title IX and sexual assaults on campus. At issue is the so-called “Dear Colleague” letter issued in 2011 by the Obama Administration which urged institutions to better investigate and adjudicate cases of campus sexual assault. The 19-page letter set standards for universities to follow when investigating and adjudicating sexual assault charges, including using a “preponderance of the evidence” standard (rather than a “clear and convincing evidence” standard). Secretary Devos says she is now looking into whether these police are too tough and whether they deprive students who are accused of their civil rights – noting that “a system without due process ultimately serves no one in the end.”

While Secretary Devos was having her meetings inside the Department of Education, I stood on the steps of the building attending a “Survivor Speakout.” The goal of the Speakout was to highlight the reasons why Title IX’s protections are imperative in ensuring that every student can access an education that is safe and equal. Survivors, loved ones, and advocates alike stood together sharing stories about how their educations have been affected by gender-based violence. I watched as both men and women, young and old, stood together holding signs which read “ ____ needs Title IX because ____”.

I had two takeaways from the Survivor Speakout. First, Secretary Devos and others must listen to the story of survivors. We cannot go back to the days – which were not so long ago – when student complaints of sexual assaults on campus were dismissed or ignored. We cannot go back to the days when people were scared to come forward. The group Know Your IX is promoting a hashtag on Twitter – hashtag DearBetsy – asking people to post their stories about sexual assault. Before making her determination, I hope that Secretary Devos and others listen to more victims stories.

Second, Secretary Devos and her staff including Acting Assistant Secretary for Civil Rights, Candice Jackson are doing victims a great disservice when they spread a narrative that many or most of assault allegations on campus are false. In an interview with the New York Times, a week before, in remarking that the investigative process on college campuses has not always been fairly balanced between the accuser and the accused, Ms. Jackson observed that “90 percent” of the accusations fall into the category of “‘we were both drunk,’ ‘we broke up, and six months later I found myself under a Title IX investigation because she just decided that our last sleeping together was not quite right.” Ms. Jackson subsequently apologized for those remarks calling them “flippant” and noting that “they poorly characterized the conversations I’ve had with countless groups of advocates.”

Nonetheless, in having this debate, people have to be careful about normalizing a notion that most accusations are false or only the result of a drunken evening. Following Ms. Jackson’s statement, the National Women’s Law Center, joined by over 50 organizations, replied with data Ms. Jackson and Secretary Devos should hear: “ In 2016, the US Department of Justice conducted a climate survey on several campuses to find that an average of 24% of transgender and gender non-conforming students, 23% of female students, and 6% of male students are sexually victimized on campus. This study replicated the findings of federal research conducted in 2007 and 2000. Additionally, a meta- analysis has shown false reports are extremely rare, constituting only 2-8% of complaints.”

Secretary Devos has not revealed her plans — but suggested that she may take action in the near future. She said: “We need to do this right, we need to protect all students and we need to do it quickly.” The current process may not be perfect. However, I hope in making her revisions Secretary Devos remembers the victims. On the steps of the Department of Education during the “Survivor Speakout” I heard a lot of women with stories to tell. I hope she hears them too – as all students deserve to have a safe and equal access to education.

By The Advocates for Human Rights’ youth blogger Jenna Schulman. Jenna is a high school student in Washington, D.C.