Burundi: The Human Rights Crisis You May Not Have Heard Of 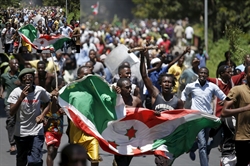 As an International Justice Program intern with The Advocates for Human Rights, I have encountered many examples of human rights abuses throughout the world. Yet, while the recent drama of domestic politics continues to dominate the attention of American citizens, these international human rights violations go largely unreported and unaccounted for in U.S. media. The ongoing human rights crisis gripping the state of Burundi presents one such example as members of civil society continue to face politically-based violence at the hands of the ruling party.

After a failed coup d’état by military officers in May 2015, the Government intensified its repression of political dissent by suspending most of the country’s independent radio stations. In addition, journalists and human rights defenders face violence and increasing restrictions on their rights to freedom of expression and association. Recently adopted legislation further limits the ability of non-governmental organizations to operate and for civil society to participate in public life. By mid-2015, most of Burundi’s opposition party leaders, independent journalists and civil society activists had fled the country after receiving repeated threats.

The human rights crisis that gripped Burundi in 2015 deepened in 2016 as government forces targeted perceived political opponents with increased brutality. The Burundian National Defense Forces (BNDF) and the Burundian National Intelligence Service (SNR)—often in collaboration with members of the ruling party’s youth league, known as Imbonerakure—committed numerous killings, disappearances, abductions, torture, rape, and arbitrary arrests against the perceived opponents of the ruling party.

For perpetrators of these crimes associated with the ruling party, there is almost total impunity. The ruling party continues to interfere with Burundi’s weak justice system and therefore these human rights abuses are rarely punished. The government’s suspected political opponents have been arrested and held for prolonged periods unlawfully. Ultimately, an average of more than one thousand people fleeing the violence escaped to nearby Tanzania per day in 2016 to join the 250,000 already spread across Eastern Africa.

The Advocates’ Refugee and Immigrant Program provides legal representation to individuals seeking asylum. The Advocates has received direct information about suppression of political opinion in Burundi from survivors fleeing human rights abuses in the country to seek asylum in the United States. Our clients share stories of being accused, often arbitrarily, of supporting anti-government protests. They report police and Imbonerakure members searching their homes, looting their businesses, and arresting, beating and interrogating them and their family members. While each client’s case is different, their experiences confirm that the legal system and policies in Burundi are failing to provide individuals with adequate protection from politically-based violence.

In July, The Advocates for Human Rights submitted a stakeholder’s report to the Universal Periodic Review, identifying specific measures that the Burundian Government should enact to address political suppression in the country.

First, Burundi should combat impunity by systematically and promptly carrying out investigations of criminal activity committed by government affiliates and ensure appropriate compensation for such crimes. In the previous UPR, the Government of Burundi accepted recommendations to continue efforts toward combatting impunity including the establishment of a Truth and Reconciliation Commission. While the Commission was established in 2016, serious concerns exist regarding the Commission’s ability to fulfill its mandate with the expanded use of temporary immunities which have de facto become permanent amnesty schemes. Burundi should then establish an independent mechanism for investigating complaints of torture or ill-treatment at the hands of members of police or security forces to ensure accountability for perpetrators of human rights violations.

Second, the Government should take the necessary steps to ensure that legal systems and policies are in full compliance with Burundi’s international obligations with respect to freedom of expression. During its last UPR, Burundi rejected 15 recommendations related to freedom of expression and association, as well as protections for human rights defenders. Burundi must afford journalists and human rights defenders the freedom to carry out their work independently and without fear of persecution or intimidation.

Overall, Burundi is failing to meet its international obligations to investigate and prosecute political-based violence perpetrated on behalf of the ruling party. Security forces, intelligence services, and Imbonerakure members are repeatedly identified as responsible for extrajudicial executions, enforced disappearances, abductions, arbitrary arrests and detention, torture and ill-treatment, and sexual violence. The Burundian Government must act to combat impunity and protect civil society members from such human rights violations.

With the ongoing human rights crisis gripping the state of Burundi, members of civil society continue to face politically-based violence at the hands of the ruling party. Unfortunately, these human rights violations continue to go largely unreported and unaccounted for in U.S. media. Although American domestic politics seem to dominate the current political discourse, we all need to remain vigilant and afford these international, human rights violations the attention they deserve.

By April Will, a second-year J.D. student (class of 2019) at the University of Minnesota Law School. She is a 2017 summer intern with The Advocates’ International Justice Program.