Dignity for All: World Day Against the Death Penalty highlights detention conditions on death row 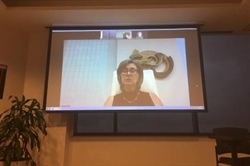 “The best way to ensure someone does not leave prison is to make him into the person he was prosecuted as.” - Damon Thibodeaux, exoneree who spent 15 years on Louisiana’s death row

Imagine living in a 8 by 10 foot room with a steel or concrete slab for a bed. The door is solid steel and the food tray slot at the bottom offers the only source of contact with the rest of the world. These are the kinds of conditions that many death row inmates in the United States endure for 23 hours a day. The Advocates highlighting the brutal living conditions for people on death row at a Continuing Legal Education event on October 10, the 16th annual World Day Against the Death Penalty. The event was hosted at the law firm of Fredrikson & Byron. During this talk, speakers contrasted current conditions in U.S. prisons with the minimum standards set by the Nelson Mandela Rules. Their presentations highlighted the physical and psychological consequences of those conditions on people sentenced to death in the United States.

The Nelson Mandela Rules, formerly known as the UN Standard Minimum Rules for the Treatment of Prisoners, outline prison standards with relation to disciplinary measures, legal representation, and medical treatment. Amy Bergquist, staff attorney at The Advocates and Vice- President of The World Coalition Against the Death Penalty, explained these rules and gave examples describing how they are seldom followed here in the United States and in other countries. For example, Rules 24-29 state that inmates have the right to access the same quality of healthcare that is available in the general community outside the prison. In many countries, including the U.S., healthcare for detained people is, however, grossly neglected in order to keep costs low. According to the Federal Bureau of Prisons' chief psychiatrist, close to 40% of inmates have mental illness while only 3% of them are being treated regularly. These services are typically provided only to inmates who had been diagnosed and were receiving treatment prior to their arrest, while people who develop symptoms or are diagnosed in prison are often overlooked.

When combining the substandard health care system in prisons with solitary confinement, prisoners are set up to play a self-fulfilling prophecy. Damon Thibodeaux, an exoneree who survived 15 years on Louisiana's death row, described this degrading treatment during the World Day event. He stated, "It is meant to break you down morally, mentally, and physically. It is meant to tear you down so they can paint you as the inhuman animal." He detailed the unbearable heat in his small, unairconditioned cell during Louisiana summers, when the only way to cool off was to strip down and lie on the floor. Thibodeaux also described the communicable diseases that spread through the prison because of overcrowding. He explained that these diseases would often go untreated because inmates had to pay to see a healthcare provider and often faced long delays before receiving treatment.

Also speaking at the event was Lisa Borden, Baker Donelson's Pro Bono Shareholder and an attorney who represents indigent death row inmates. Borden also described the prison conditions she has witnessed in the Alabama state prison system. She is currently representing detained clients in a class action lawsuit against the Alabama Department of Corrections. The district court found the mental health care services provided to prisoners are "horrendously inadequate". One of the key problems, as Borden explained, is the privatization of healthcare in the prison system. Since the private health care providers are allocated a set amount of funding per person, they have an incentive to keep their costs low by using fewer resources.

Borden also shared the extreme conditions that prisoners who are not in solitary confinement routinely face. "Most facilities house 150-200% of the number of people for which they are designed." These overcrowded conditions are worsened by staffing shortages, with some prisons having less than 40% of the recommended prison staff.  In addition, prisons in Alabama are old, with dilapidated structures.  Borden shared an account where a prisoner died in his cell after his neighboring cellmate reported his unresponsiveness. Due to the prison's malfunctioning electronic locking system, the officers were not able to reach him until 30 minutes after they were notified.

This event highlighted the human rights violations faced by people sentenced to death, as well as by other detained individuals, in the United States. To learn more about living conditions on death row around the world, see http://www.worldcoalition.org/worldday.html

United States Department of Justice. (2017). Review of the Federal Bureau of Prisons' Use of Restrictive Housing for Inmates with Mental Illness. Retrieved from https://oig.justice.gov/reports/2017/e1705.pdf