At the UN Human Rights Council, Biden Administration Does an About-Face 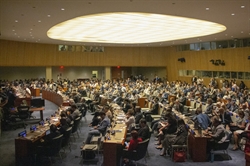 The US delegation appeared before the US Human Rights Council in Geneva this morning for the interactive dialogue on the outcome of the Council’s Universal Periodic review of human rights in the United States. As we mentioned in our preview of the appearance yesterday, the written submission by the US indicating whether it accepted the recommendations made by its peer delegations contained a few surprises, particularly on the topic of systemic racism and police violence.

During the Trump administration, the US had taken the rather unsurprising (at the time) stance that systemic racism in the US simply did not exist, and that it certainly did not play a role in disparities in police violence. Last summer, when the Council convened an urgent debate on the topic, the Trump administration had hotly opposed the process and refused to participate, but furiously worked behind the scenes to ensure that all references to the US were deleted from the resolution that was ultimately issued. The Trump administration’s rejection of the role of systemic racism in policing continued when the US delegation made its presentation for the UPR interactive dialogue, during which many other member countries nevertheless recommended that the US take steps to address the problem.

The Biden administration took office before the written response of the US to the UPR recommendations was due to be submitted. The response submitted on March 4 accepted a number of recommendations on the need to address police violence and to ensure that race is not a factor in policing but failed to accept the recommendations that expressly called for systemic racism in policing to be eradicated. Given the forthright statements previously made by both President Biden and Secretary of State Blinken acknowledging the need to do exactly that, it came as a surprise that the US did not accept these recommendations.

In its oral presentation to the Council this morning, however, the US took a decidedly different position. Acting Assistant Secretary of State Lisa Peterson stated:

Last summer, as protesters marched to demand justice following the tragic death of George Floyd, we were reminded, once again, of how pervasive systemic racism is in the United States and the urgent need to address it. What many Americans did not see, or had simply refused to see, could not be ignored any longer. Floyd’s death was a flashpoint within a longstanding national conversation around police brutality against African-Americans and persons of color that galvanized a global call to end the injustices of systemic racism across the globe. We saw this very Council take up this issue last summer during its Urgent Debate on Racism. And in that regard, we welcome the High Commissioner’s statement that the implementation of HRC resolution 43/1, stemming from that debate, will reflect and amplify the voices of victims, as well as their families and communities in all countries. The United States is dedicated to eliminating racial discrimination and the use of excessive force in policing. The Department of Justice has issued guidance stating unequivocally that racial profiling is wrong and has prohibited racial profiling in federal law enforcement practices. Many states have done the same. Our Department of Justice prosecutes individual officers who violate someone’s civil rights and investigates police departments that might be engaging in a pattern or practice of conduct that deprives persons of their rights. We also seek to proactively prevent discrimination or the use of excessive force by participating in increased training of federal, state, and local law enforcement officers across the country.