The Advocates Welcomes House Passage of NO BAN Act 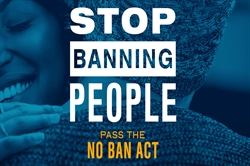 The Advocates for Human Rights welcomes today’s passage by the House of Representatives of the NO BAN Act and urges its swift passage in the Senate. The NO BAN Act will establish higher standards for use of executive authority and stronger levels of accountability on immigration-related policymaking to help prevent the abuse of immigration laws and authority for xenophobic purposes. Originally introduced following the previous administration’s travel bans, the NO BAN Act seeks to prevent future abuses by the executive branch.

The Advocates for Human Rights has provided legal services to asylum seekers and advocated for the human rights of migrants and asylum seekers for more than three decades. During the Muslim and African Bans, we witnessed how such discriminatory bars impacted our clients and violated U.S. obligations under international and domestic law.

“Due to the bans, our clients were unable to reunite with family members, many of whom had been separated for years in dangerous situations,” said Sarah Brenes, director of The Advocates’ Refugee and Immigrant Program. “The NO BAN Act is a powerful step towards preventing future injustices, particularly targeting Black and Brown immigrants who suffer most at the hands of our nation’s outdated immigration system, by instituting higher standards and greater accountability.”

While President Biden has rescinded the bans, low levels of accountability and weak standards in existing immigration law do not adequately forestall discriminatory bans in the future.

As written, the NO BAN Act would take crucial steps toward stemming executive abuse by:

As the NO BAN Act makes its way to the Senate, The Advocates for Human Rights joins numerous others in urging its swift passage.