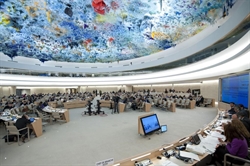 As the Trump administration drew to a close, anti-death penalty advocates were devastated by an unprecedented series of federal executions. Candidate, and later President-Elect Joe Biden, expressed his opposition to the death penalty as the killing spree continued, leading death penalty opponents to hold high hopes for swift action to both end the federal death penalty and implement the incentives to move states toward abolition of which Biden frequently (if vaguely) spoke.

When a UN member country accepts a UPR recommendation, it is committing to working toward its implementation, and must report on its progress in doing so at the next UPR cycle. There is no penalty, beyond some potential embarrassment, for failing to complete the job. Acceptance of these death penalty recommendations would provide the underpinning for strong movements by the administration, via both appropriate executive actions and pressure on other necessary actors, including Congress and state government officials, to help the US keep its commitments.

Despite previous strong statements from President Biden about his opposition to the death penalty, however, the US response to these invitations from its Human Rights Council peers was muted, at best. It only partially accepted most death penalty recommendations, and dodged making firm commitments in favor of excuses based on federalism and the powers of the executive branch of government.

Worse, in its remarks to the Human Rights Council at the adoption of the UPR outcome, the US opined that the recommendations it received on the death penalty "reflect continuing differences of policy, not differences about what the United States' international human rights obligations require." This is not, in fact, a matter of mere policy difference. As we have previously explained, the federal government's application of the death penalty has been squarely in violation of the international human rights obligations of the US.

The US delegation representative went on to "note that President Biden supports legislatively ending the death penalty at the federal level and incentivizing additional states to follow the federal government's example," but provided no insight into how the administration plans to accomplish these objectives.

Can President Biden eradicate the federal death penalty with the stroke of a pen? No - but he can commute the sentences of everyone currently on federal death row, and he can instruct the Department of Justice to adopt a policy that US Attorneys are not to seek the death penalty going forward. He can make the passage of recently introduced legislation to abolish the federal death penalty a top administration priority. Can President Biden end the death penalty in US states through executive action? No - but he can ensure that every available federal measure is used to make continued executions come at a great cost. That will take a concerted effort by a number of government agencies to review funding programs and other mechanisms for applying the necessary pressure (including FDA oversight of the use of pharmaceutical products for lethal injection), which the President should initiate immediately. It will take bolder statements and bolder action by President Biden to push death penalty abolition forward during his Presidency.

The US did fully accept one death-penalty related recommendation, one for which The Advocates specifically lobbied the country that gave it. Belgium recommended that the US ensure those facing the death penalty have adequate legal representation. Now, it is the responsibility of the Biden administration to begin to implement that recommendation not just at the federal level, but at the state level, where most death sentences are issued. As we discussed last Fall in connection with World Day Against the Death Penalty, the legal representation made available in many US states to poor defendants in death penalty cases (and they are almost always poor) is abysmal. President Biden can dramatically reduce the imposition of new death sentences simply by taking steps to ensure that everyone facing a potential death penalty trial has a good, qualified lawyer.

Progress has been made toward ending the death penalty in the US in recent years, despite the horrific series of federal executions carried out by the Trump administration. Executions in death penalty states have been slowly declining for decades. Virginia officially abolished the death penalty just last month, and there are hopeful signs that Wyoming and Nevada may soon do the same. In Georgia, which has not abolished the death penalty, new death sentences plummeted after the state created a capital defender office to provide qualified counsel to every defendant in a capital case. The Biden administration must seize the opportunity to build on this momentum, not simply watch from the sidelines and root for it to continue.