The UPR as a Framework for Accountability for Excessive Use of Force by Police in the U.S. 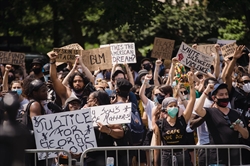 In the recent Universal Periodic Review (UPR) by the Human Right Council, the United States received thirty recommendations from countries around the world calling for it to address excessive use of force by police. Many issues around officer-involved killings in the United States fall squarely within international law prohibiting excessive use of force.

Many of the UPR recommendations made on the issue of excessive use of force by police recognized that it needs to be addressed alongside societal and structural reform. For example, the State of Palestine recommended that the United States “Put an end to structural racism and segregation, take measures to end police misconduct and documented human rights violations and pursue structural reforms to reduce the role of police in addressing societal problems” Centering the actions of police in the larger societal and structural problem of racism is a valuable approach that addresses the core of the problem rather than treating it as a symptom.

The acceptance of UPR recommendations provides the framework of accountability on which the United States will be judged when the implementation of these recommendations is reviewed in the next UPR cycle. In her opening address to the council, Ms. Lisa Peterson, Acting Assistant Secretary of State, was open in addressing the urgent issue of police brutality in the United States, yet her statement lacked an acknowledgement of the depth and scope of police brutality and its systemic origin. Peterson stated:

The United States is dedicated to eliminating racial discrimination and the use of excessive force in policing. The Department of Justice has issued guidance stating unequivocally that racial profiling is wrong and has prohibited racial profiling in federal law enforcement practices. Many states have done the same. Our Department of Justice prosecutes individual officers who violate someone’s civil rights and investigates police departments that might be engaging in a pattern or practice of conduct that deprives persons of their rights. We also seek to proactively prevent discrimination or the use of excessive force by participating in increased training of federal, state, and local law enforcement officers across the country.

Increased training and vigorous federal review will not be an adequate response to an issue that has its roots in white supremacy. In his book The Condemnation of Blackness: Race, Crime, and the Making of Modern Urban America, Professor and historian Khalil Gibran Muhammad traces the origins of US policing back to slave patrols that evolved into white supremacist groups like the Klu Klux Klan and police patrols of northern American cities. He argues that the use of excessive force and outright brutality has always been a tool of managing minority populations throughout United States history. It will be vital for the United States to consider this historical context of state and police violence in implementing recent UPR recommendations.

Excessive use of force by police will not be addressed in the United States over the span of one periodic review. Any measurable progress will require massive systemic change that acknowledges the violent origins of policing in the United States. U.S. leaders must come to terms with the reality that current federal systems to prevent discrimination and the use of excessive force in policing are wholly inadequate.

In the wake of the conviction of Derek Chauvin for the murder of George Floyd, questions have arisen surrounding accountability and justice. While Chauvin's guilty verdict allows for a global sigh of relief, the threat of excessive use of force by police in the United States is ever present. The killing of Daunte Wright, a 20-year-old Black man, by a police officer in a suburb of Minneapolis during the trial of Derek Chauvin illustrates that excessive use of force persists. This moment demonstrates that accountability is possible after unrelenting pressure from civil society.

Nonetheless, the justice required for actual change will be found in the larger commitment to complete structural and societal reform to eradicate systemic racism in the United States. The framework of the Universal Periodic Review encourages this accountability in making these societal changes, yet it will be up to the United States to implement recommendations made by the international community, and to uphold national demands for change. As scholar and human rights activist Angela Davis has stated, “You have to act as if it were possible to radically transform the world. And you have to do it all the time.”