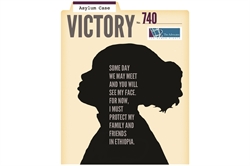 Early one morning in 2007, three Ethiopian security officers came to Ms. B’s door, telling her she was wanted for questioning. The officers escorted her to a police station, where they interrogated her about her recent trip to the United States.

Ms. B, an Ethiopian national and businesswoman, explained her trip to the Twin Cities was for personal reasons. The officers claimed to have evidence that she had traveled to the United States to organize political opposition among the Twin Cities’ sizable Ethiopian diaspora community.

Denying the officer’s accusations, she refused to sign a document admitting that she participated in anti-government activities. The officers beat her for more than an hour. Detained for a month, she was raped and tortured by security force members during her captivity. She slept on a piece of cardboard and was given only bread and water to eat. She was finally released without charge when her husband paid a large bribe.

Following her release, Ms. B and her family faced regular harassment from strangers accusing her of escaping from prison. The strangers, believed to be off-duty police officers, came to her home in the middle of the night and threatened to “disappear” her if she did not pay them a bribe. The same people chased her daughter on her way home from school. After the threats continued for more than a month, Ms. B relented and, out of fear, paid the bribe.

Her persecutors were not deterred. In 2008, Ms. B’s 13 year-old son was drugged and kidnapped. She was forced to pay a large ransom to gain his release. Out of fear, Ms. B and her youngest son fled to the United States.

With the help of her attorneys at The Advocates for Human Rights, she was granted asylum in 2009 and is now a legal permanent resident currently working at a hotel in Minneapolis. Her son who accompanied Ms. B to Minnesota is enrolled in high school. Her daughter, who came here after Ms. B won asylum, is studying at design school. Hopefully, Ms. B’s second son will join them soon.