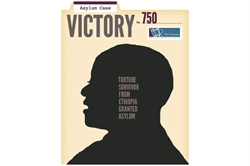 Born in Ethiopia and of Oromo ethnicity, Mr. B and his family sup­ported the Oromo National Congress and the Oromo People's Congress Organization instead of Ethiopia's ruling party.

When Mr. B was a teenager, his uncle was arrested for his political affiliation and held for four years without a trial.

Years later, Mr. B publicly supported the campaign for a seat in Ethiopia's House of Representatives being waged by his best friend, a man who fought for Oromo rights. Mr. B's friend won the election, despite months of government threats. His friend was assassi­nated by the government shortly after his election victory.

For participating in the campaign and for talking about political participation, soldiers arrested Mr. B and took him to military prison. He was beaten, tor­tured, interrogated, and threatened with death.

After his release, Mr. B stayed away from politics. Nonetheless, he was arrested again and forced to sign an agreement, promising to pro­mote the government party.

Mr. B fled Ethiopia. After traveling through Kenya, Cuba, and Latin America, he made it to the United States in 2011. He got help from The Advocates for Human Rights and its volunteer attorney Sarah McGuire with his asylum claim. "She helped me a lot," said Mr. B of McGuire. He also received support from The Center for Victims of Torture with medical help and counseling.

"Everything seemed totally different and complicated when I first arrived. Now I'm settling down and feeling a part of the community," he said. "We have a big Oromo community in Minnesota and there is a church here that I am a member of."