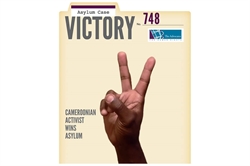 Mr. R led awake on an October morning in 2004 in Cameroon, a government soldier holding a gun to his head. He was taken to a military barracks, beaten and tor­tured. He was released the next day after his wife paid for his "freedom." His first stop was at a hospital, where he spent eight days recovering from the severity of his beatings.

The day before his arrest, he had fled a demonstration when government forces arrived, dispersing the crowd with tear gas and a water cannon and, eventually, firing live ammunition. He had helped plan the demonstration that memorialized the anniversary of southern Cameroon's independence from the United Kingdom, and he had advocated for the separation of the English-speaking southern region of Cameroon from the French-speaking northern region.

Following another arrest, he fled Cameroon. His first destination was Belgium. When he learned Cameroon had formally requested the Belgian government repatri­ate Cameroonian nationals, he left Belgium in 2008 and headed for the United States.

When Mr. R's initial asylum application in the United States was referred to an immigration judge, a friend encouraged him to get help from The Advocates for Human Rights. With support from The Advocates and volunteer attorneys from Robins, Kaplan, Miller & Ciresi, he gained asylum in 2011. He secured his green card in 2013, giving him per­manent residency in the U.S.

Secure, Mr. R turned his focus on bringing his family to the United States. Shira Shapiro of Robins Kaplan is working with him on what has proven to be a pain-staking process.

Mr. R is working to complete a master's degree in man­ufacturing systems at the University of St. Thomas; he wants to earn a PhD in the future.