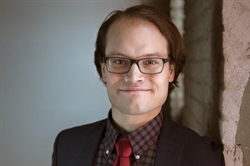 In the winter of 2004, Patrick Finnegan’s first-time volunteering with The Advocates as an interpreter was off to a rough start. “I managed to get myself into a fender bender on the way there,” Patrick remembers. “Worse, it was my error… The lawyer almost had to call for another interpreter.” Thankfully, he made it. The interview went well, the client was granted asylum, and Finnegan has been part of The Advocates’ family ever since. “It was absolutely worth the car accident.”

“I was raised by educators who believed that open-minded kindness is a crucial way to approach the world,” Patrick explains. “As such, I take my public moral values very seriously and I see them reflected in The Advocates’ work.” In the 16 years since those early days of interpreting, Patrick has remained a committed supporter of human rights, where his core values have found good company. Patrick began volunteering for The Advocates as a French-English translator in 2004. A year later, as a staff member at the University of Minnesota’s Human Rights Center, he worked on collaborative projects with The Advocates. He later served as an intern while studying human rights in graduate school. Patrick briefly worked at The Advocates in 2016-17, and now proudly continues to support The Advocates as a volunteer and monthly sustainer. His and other committed sustainers’ giving greatly strengthens the human rights movement. “Working together, we make The Advocates more effective. Our monthly donation may be a drop in the bucket, but with enough other drops, you end up with a full bucket.”

Patrick also puts his musical talents to good use. As “Dangerously Competent,” he and his wife Melissa performed a concert during The Advocates’ first ever virtual event last year. It even included a brief guest appearance from their cat, Cody. Melissa and Patrick spoke on the importance of The Advocates’ work during such unprecedented times. “We need to remember that during a public health crisis, all the big challenges of life are still there. Whether it’s non-COVID health problems, immigration, or asylum proceedings, human rights needs are still there… and The Advocates have been doing critical work to fill those needs.”

Patrick embodies how consistent acts of generosity can change the world for good and sees himself staying the course as a donor and volunteer. He refers to his family as a “human rights family,” that believes in putting their money where their values are and – of course – offering their musical talents whenever possible. But he also says there are other ways to support human rights and to get involved with The Advocates. “Elections have direct human rights consequences here and abroad; study government representatives and the issues affecting our communities, and vote for candidates who support human rights.” He invites others to “look for volunteer opportunities or donate goods or services. Many organizations that serve vulnerable communities almost always need supplies that you may have around the house.

The fender bender on his way to his first interpretation interview as a volunteer for The Advocates did not stop Patrick. Over the years he has continued to protect human rights in many ways. His commitment and enthusiasm inspire us and make us hopeful for the work ahead.