Joan Kuriansky: Celebrating the Work of Our Volunteers 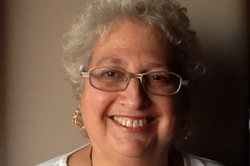 The work done by The Advocates for Human Rights is fueled by its team of talented volunteers. One of these volunteers is Joan Kuriansky, a Washington D.C.­-based lawyer, with a strong commitment to women's rights work, domestic violence issues, and human rights advocacy. Kuriansky began volunteering with The Advocates in the late 1990s and, ever since, has been a consistent volunteer. I recently had the chance to speak with Kuriansky about her career, including her work with The Advocates.

Moments into the interview, Kuriansky's passion for human rights advocacy became evident as she excitedly explained to me about some of her past jobs and projects. "It is a lot of fun for me to do this work. I have been involved, especially with the issue of domestic violence, since 1978," she told me. Kuriansky was the co-founder of a battered women's program in DC, My Sister's Place, she ran a legal center in Philadelphia protecting domestic violence victims, and she worked on the passage of the Violence Against Women Act.

Throughout her time volunteering for The Advocates, Kuriansky has worked on a number of different projects. Her first project was in Ukraine providing advocates with domestic violence training. Kuriansky then conducted an in-depth study in Armenia related to domestic violence issues. The report consisted of interviews with attorneys, prosecutors, advocates, and government officials. "And that was my introduction to the work of The Advocates. Already, I was impressed with the way they structured their training, the relationships they were forming, and the breadth of the work," Kuriansky told me during our interview. Her report was later used to inform future advocacy work of The Advocates in Armenia.

One of Kuriansky's favorite parts of volunteering with The Advocates is being a part of their annual United Nations Study-Advocacy trip to Geneva. Since 2016, Kuriansky has been an integral member of The Advocates team of volunteers that lobbies at the United Nations. She has co-facilitated panel discussions, delivered a short presentation to the full body of the Human Rights Commission, sat in on country hearings, and met with special rapporteurs and individual delegates from around the world. Kuriansky credits The Advocates for the impact that she has been able to have in Geneva:

"It was because of the extraordinary preparation of The Advocates' staff that we, as volunteers, could be useful and, I hope, effective. It would not have been possible for us to have had the impact that we did, if we did not have the very well-developed materials and instructions about how to go forward with meeting with these different delegates."

She noted that many of the team's recommendations have been incorporated into official comments to various countries under review and some countries have even directly implemented their recommendations:

"In one instance we saw a country increase its funding for domestic violence programs. We also saw that certain laws were changed in keeping with the recommendations. In another instance, moving from law to administration, we saw where a country reorganized its response to domestic violence and the role that the different members of the legal community would play in that regard."

Currently, Kuriansky is working with The Advocates on various shadow reports, including one on the impact that the COVID-19 pandemic has had on domestic violence. Kuriansky's shadow report is particularly focused on the D.C. metropolitan area.

When I asked Kuriansky why she chooses to volunteer to with The Advocates, her answer was simple. She told me that she enjoyed the direct application of the work. She praised The Advocates' advocacy skills:

"One of the great aspects of The Advocates in my mind, is their ability to present information in a way that is compelling, raises hard issue that could otherwise be responded to very defensively by a country but, because of the methodology and on the ground support, the recommendations that come from The Advocates … are taken very seriously and sometimes you don't find that is the case if a country believes that the outside groups, which are coming in to "criticize" them, are not very respectful of the people in it."

Kuriansky is a model volunteer - longstanding, enthusiastic, dedicated, passionate, and knowledgeable - and is a role model for many. Just as Kuriansky credits The Advocates with being effective change makers, The Advocates credit her with helping to actualize that change.

By Jenna Schulman, University of Pennsylvania sophomore and active volunteer for The Advocates For Human Rights.