A Delightful Evening at The Advocates’ Human Rights Awards Dinner 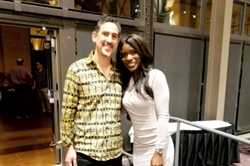 The scene that unfolded on the evening of June 20, 2019 had been in preparation for months. Excitement filled the air as staffers and volunteers, each assigned a list of duties to fulfill, quickly moved past each other in The Depot - a Minneapolis historic venue chosen as the site for the 2019 Human Rights Awards Dinner and, from what I learnt that evening, a former train station serving as a stopping point for the Orphan Trains.

Our keynote speaker, guest of honor, and recipient of the 2019 Don and Arvonne Fraser Human Rights Award, Andrés Cediel, gave an engaging speech. His qualifications as professor of visual journalism at the University of California Berkeley, investigative journalist, and accomplished documentarian had the guests attentively following along as he took us down his trail of professional experiences. He opened his speech with a statement acknowledging the lands on which we were, paying respect to the Anishinaabe people as traditional stewards of the land and recognizing the relationship that continues to exist between them and their traditional territories. He reminded attendees of the history of Indigenous people in Minnesota, some of whom had been held in detention camps at Fort Snelling, an area not far from where we sat.

Cediel then segued into a discussion about the Orphan Trains in the late 1800s. Orphan trains? I asked myself while trying to catch his explanation of their presence in Minneapolis. I searched the room of the almost 700 dinner guests - mainly legal professionals, advocates, and donors from varying professions - to find that most shared the same look of curiosity. It turned to horror when we learned about the system in which an estimated 150,000-250,000 allegedly orphaned and abandoned children from the East Coast were relocated to new homes in Minnesota and across the American Plains. Sadly, the Milwaukee Road Depot building had also once been a station where children were displayed and given away. Essentially, they were placed on auction blocks and sold to the highest bidder - some of whom, having ill motives, bought them as cheap farm laborers, partaking in what we'd now recognize as labor trafficking. Despicable, I thought. Yet I appreciated the progress made from that dark part of America's history to now where such trains couldn't be fathomed.

Cediel pointed out that human rights violations take place everywhere, including here at home. This is illustrated in his documentary films "Rape on the Night Shift," "Trafficked in America," and "Rape in the Fields," which were featured in the PBS Frontline Series and which he created with his collaborator Daffodil Altan. [As an aside, earlier in the week the first two films had been the focus of two very well attended Continuing Legal Education events facilitated by The Advocates.] Cediel's film, "Rape on the Night Shift," documents the story of custodial workers sexually assaulted by their supervisor. Cediel told us of the heavy emotions he experienced from listening to the women's stories and of secondhand trauma - a parting gift I suppose would be inevitable in his line of work. I felt similar emotions watching the films and again listening to his speech.

Award Recipients of the Evening

But the night was also about other awards - the Volunteer Awards recognize the importance of volunteers to The Advocates' work and certain outstanding volunteers in particular. Staff members of The Advocates took their turn on stage to distribute awards to volunteers who had made great contributions to the Advocates. Among the list of recipients were Dr. Charlayne Myers and Steve Woldum, Charles Weed, Judi Corradi, Zonta Club of Minneapolis, Alena Levina, and the Somali 92 Team. The Somali 92 team is a collection of lawyers, paralegals, and other staff who represented deportees on a December 2017 Customs and Immigration Enforcement chartered flight that had gone horribly wrong.

Following this was the announcement that Minneapolis-based Women at the Court House (WATCH), an organization that works to make the justice system more effective and responsive for victimized women and children in domestic violence, sexual assault, and sex trafficking cases, would become part of The Advocates' Women's Rights program. I smiled to hear the news, which I think is a positive step for the human rights work here in Minnesota and beyond.

Funding for The Advocates

The evening would not have been complete without professional auctioneer and award recipient, Pat Brenna, who, with great ease and skill, drew enthusiasm and laughter from guests as she tugged at their purse strings to fund the work of The Advocates. It was a great success! Many guests happily waved their donation envelopes in the air at Pat's call for takers to fund projects ranging in value from $100 to $10,000. Pat, never shy, informed guests of The Advocates' goal to raise $270,000 from the event to help fund The Advocates' various human rights projects. And, from the looks of the unofficial numbers, that announcement paid off - and yes, that pun was intended.

Earlier in the evening there had been a silent auction. Many items were auctioned off - imported wines rich in vibrant flavor and aromatic notes guaranteeing to leave the consumer more than satisfied, trips abroad including accommodations for a stay in a beautiful home in Italy, and fine hand-made jewelry and clothing among many other tempting indulgences for the guests. All in all, The Advocates raised close to $300,000 from this year's event - a record-setting amount in the 15+ year history since this event has been held.

Just as I, staffers, and volunteers made a concerted effort in setting up for the event, we also pitched in during the take-down process. I watched as guests, gleaming with smiles and uttering thank-yous to members of The Advocates, filed out of The Depot. Despite my tired eyes caused by the toll of the day's activities, I reflected on the sentiment that Andrés Cediel departed onto us during his keynote address. He stated, as Martin Luther King Jr. had popularized, that "the arc of the moral universe is long, but it bends towards justice."

While Cediel believes this to be true - that good ultimately prevails despite the evil and tragedy around us - he added that it requires a proactive effort made every day by people who care about human rights and dignity. And this is exactly what The Advocates do. During my time with The Advocates, I have had the pleasure of joining this effort at the international level, where The Advocates fight for justice and to bring to surface human rights violations happening around the world.

Though The Advocates has had many victories, Cediel reminds us that the fight for good is an ongoing process. And with the continued support from staff members, volunteers, interns, and community donors, I believe that The Advocates will be able to remain in this fight to bend the moral arc of the universe towards justice.

By Jessica Hammond, a summer intern with The Advocates' International Justice Program and second-year law student at the University of Windsor