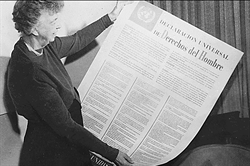 
The Advocates for Human Rights is strongly opposed to the U.S. Department of State's recently announced "Commission on Unalienable Rights." As an organization committed to implementing international human rights standards, we are deeply concerned about the many legal, moral, and philosophical problems with the Commission, its mandate, and its makeup. We have joined with other U.S. human rights leaders in sending Secretary of State Mike Pompeo a letter calling for the Commission to be immediately disbanded. (Read the full text of the joint letter here.)  With this letter, we also express  our collective desire to refocus this administration on solving some of the human rights violations it has fueled through its reactionary policies on issues ranging from immigration, asylum, freedom of religion, and myriad due process and rule of law issues.

We remain focused on fighting these human rights violations and holding our government accountable for the harms it is inflicting by its hateful, xenophobic policies and its failures to protect vulnerable people in this country, on our borders, and around the world.

The United States is scheduled to be reviewed by the United Nations Human Rights Council in May 2020 under its Universal Periodic Review (UPR) process. The UPR process involves an evaluation of the U.S. government's compliance with the full range of internationally recognized human rights outlined in the Universal Declaration of Human Rights. This is a broad review that is based on the U.S. membership in the United Nations and is not focused on specific treaty obligations.

This review will be an opportunity to expose systematic violations of the rights of refugees, the rights of asylum seekers, and women's right to be free from violence. The UPR process will highlight the U.S. government's failure to protect the rights of religious minorities, the failure to ensure that all people live without discrimination, and the failure to respect the rule of law. These and many other violations will be exposed when the U.S. States government's actions are evaluated by its peers in the Human Rights Council. The U.S. government will be called on to explain its human rights practices.

That's a tall order for an administration that seems dedicated to reneging on our obligations at every opportunity: protecting perpetrators of violence against women; telling U.S. citizens to leave if they don't like it here; attacking the press as enemies of the people; undermining the judiciary and the rule of law; and working to roll back guarantees of access to health care. So it is no surprise that the administration is trying to change the rules before it has to step into the spotlight.

Because that's what this "Commission on Unalienable Rights" is all about. If we don't like the rules, we will write new ones. And this administration has repeatedly made clear that it is prepared to violate any rule that gives those at the margins of power a voice or any rule that protects opportunities for diverse communities to live with dignity.

But human rights standards and the rule of law are stronger than this administration's attempt to undermine them. We are better than we were at the end of World War II when there were no institutions to challenge the human rights violations perpetrated by dictators and those who model their policies after them. Human rights are not merely documents. They reflect the core values of our own Constitution and the decades of jurisprudence strengthening anti-discrimination laws that have sought to ensure that these core values can be enjoyed by all. No administration is above the law and we will continue to use all available mechanisms to hold our own government accountable for its bad practices.

By Robin Phillips, Executive Director of The Advocates for Human Rights