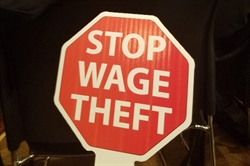 The Advocates is celebrating a victory at the state legislature this year! We are part of a coalition fighting to protect workers' rights that helped pass a new law criminalizing wage theft.

Labor trafficking is closely linked to labor exploitation such as wage theft or dangerous working conditions. In certain industries, exploitative businesses routinely refuse to pay workers what they are legally owed, avoiding liability through subcontracting, misclassifying employees, and threatening retaliation if anyone complains. Traffickers take advantage of this environment of impunity, coupling exploitation with coercion and control that keeps their victims trapped, unable to stop working.

A key component of a system to prevent and identify labor trafficking is a robust response to labor exploitation, eliminating the environment where traffickers can operate undetected. As The Advocates discovered in our report Asking the Right Questions, our system for responding to labor exploitation was not doing enough to combat abusive employers.

The Wage Theft Coalition was formed to end this environment of impunity and this spring worked with Representative Tim Mahoney to craft legislation that corrects some of the shortfalls of current laws. Many hearings and negotiations later, the bill passed and Minnesota now has one of the strongest wage theft laws in the country.

Some highlights of the new law:

Senior Researcher Madeline Lohman testifies before the MN Senate Jobs Committee on the link between labor trafficking and wage theft. She called for strengthening the current bill, SF 1816. Here are some key things she presented to the Committee:

Enhanced criminal and civil penalties for wage theft can help deter traffickers. I welcome Senator Pratt’s creation of a gross misdemeanor for wage theft, but would encourage the creation of felony wage theft provisions to allow prosecutors to match the gravity of the crime. Labor traffickers steal tens of thousands, sometimes hundreds of thousands of dollars from their victims. In no other context is a theft of hundreds of thousands of dollars a gross misdemeanor and not a felony; it should not be one in the workplace.

Labor trafficking is a serious crime that inflicts lasting harm on its victims, undermines legitimate business, and imposes costs on all of us. We have an opportunity today to strengthen Minnesota’s response to this egregious human rights abuse. Please continue to strengthen the penalties against employers that commit wage theft so that traffickers can no longer operate with impunity.

Thank you to everyone who supported these efforts and we look forward to continuing to improve Minnesota's protections for workers and response to labor trafficking and exploitation!