Eritrea and the International Covenant on Civil and Political Rights 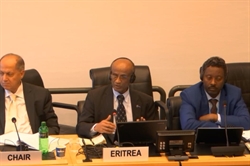 Eritrea, a Sub-Saharan African country nestled between Sudan and Ethiopia with roughly the same size and population of Minnesota, is the center of alarming human rights abuses. Despite ratifying its Constitution in 1997, the government has not implemented that framework and instead retains a one-party dictatorship. The president, Isaias Afwerki, and his security apparatus have disregarded civil liberties and basic human rights, arbitrarily detaining people, holding detainees without due process and in inhuman conditions, mandating national service, and applying systematic torture both in prisons and national service facilities. Members of non-authorized religions face persecution.

In the face of grave human rights abuses, civil society has a powerful weapon: The International Covenant on Civil and Political Rights (ICCPR). A State Party to the treaty since 2002, Eritrea is bound to its reporting and accountability measures. As an NGO with special consultative status with the United Nations, The Advocates for Human Rights works with U.N. mechanisms to hold States accountable for wrong-doing. And at the 125th Session of the Human Rights Committee, The Advocates did just that.

Introduction to the ICCPR Review Process

The first three steps in the ICCPR review process take place before the parties meet in Geneva. First, the State Party submits its report to the Committee. Eritrea failed to submit its report to the Committee, so it was more important than usual for civil society stakeholder reports to give a full picture of human rights in the country. Second, the Committee prepares a list of issues and questions for the State Party to consider. Third, members of civil society-referred to as "stakeholders"-compile reports of the country's progress and failures in improving the state of civil and political rights since the previous review. Compiling information from Amnesty International, Human Rights Watch, the U.S. Department of State, recent U.N. investigations, and interviews with clients seeking asylum from Eritrea, The Advocates made sure that the Committee knew what the Eritrean Government was doing.

The primary accounts provided by our clients are some of the most important aspects of any report we submit to the United Nations. First, staff and interns in our Refugee and Immigrant Program interview asylum clients, detailing their experiences with human rights violations in their country of origin. When that country comes up for review at the U.N. Human Rights Committee, our International Justice Program staff and interns identify patterns in the client files that help describe the human rights situation. These unique experiences inform a more complete understanding of the State Party under review. We include that information in our report after receiving explicit permission from the clients in question. These client interviews confirm and illustrate the information that secondary reports provide about the State Party's human rights practices.

In response to the bleak state of civil and political rights in Eritrea, The Advocates also suggested recommendations for the Committee to present to the State Party in order to improve its human rights practices. The Advocates makes several recommendations, such as to allow international observers to monitor the condition of Eritrean detention centers, to narrow the scope of the death penalty in the Penal Code, and to eliminate the registration process that creates "non-authorized" religions.

To watch the full constructive dialogue between the Human Rights Committee and the Government of Eritrea, click here.

During the review of the State Party, NGOs such as The Advocates can take several actions to promote their reports and recommendations. They can make oral interventions before the examination, participate in informal briefings with Committee members, and circulate shorter versions of their reports-one pagers-that highlight the most important points.

After State Party and stakeholders have had their say, the Committee compiles and releases its Concluding Observations on next steps that the State Party should take to improve its human rights practices. In the case of Eritrea, the Committee's report adopted many of The Advocates' conclusions and recommendations for:

With the report of the Human Rights Committee in hand, it is once again the duty of civil society to hold the government accountable and pressure Eritrean leaders to implement these recommendations. In the meantime, The Advocates will continue to offer asylum assistance to Eritreans fleeing the ongoing human rights violations.

To read our full report on Eritrea, click here.

To learn more about advocacy at the United Nations, read Chapter 9 of The Advocates' groundbreaking publication, Human Rights Tools for a Changing World: A Step-by-step Guide to Human Rights Fact-finding, Documentation, and Advocacy.

To support our mission of advancing global human rights, consider volunteering with The Advocates.

By Benjamin Allard, International Justice Program intern and 2019 graduate of the University of Minnesota, where he majored in Political Science and Asian Languages & Literature.