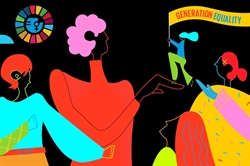 Celebrating International Women's Day in 2021 compels us to pause and examine the lessons of the past year - the COVID pandemic, economic distress and the surging mandate of Black Lives Matter. Each phenomenon has made so more visible the challenges that historically face women across the globe. Importantly, these forces have also made it clear how connected we are to each other whether in neighborhoods within miles of our home or across a continent and the extraordinary role that women play in making lives better and more just in every corner of the world.

Whether in Bangalore, Mexico City, Tulsa or Johannesburg, the risk of contracting COVID is great. Women are bearing the greatest health risks and are often least likely to get the help they need. Because women work as paid and unpaid care givers, teachers, and dominate the service sectors, they are more likely to be in contact with others who have contracted the disease yet, often work without the necessary protective gear. Economists have described the current economy as the "Shecession"- with women representing, the majority of low-wage workers, the first to be laid off, the last to be rehired, and less likely to be eligible for unemployment insurance.  The UN and UNDP estimate that the pandemic will push 47 million more women and girls below the poverty line. Our upcoming workshop at the NGO CSW65 Virtual Forum will highlight the economic and other inequalities women face as a result of the pandemic. Register here: https://bit.ly/3dmVgSk Event link: https://bit.ly/2NhPoiL

Domestic violence is on the rise, yet a victim/ survivor is more likely to be trapped inside with her abusive partner with fewer resources available to which she can turn. Often neither she nor her children leave their home, making it hard for others with reporting responsibility to do so. The Advocates, aware of the challenges that victims of domestic violence face in accessing justice and protection in Minnesota, undertook fact-finding to identify gaps in the state's responses and recommendations. Our research confirmed these challenges that victims and survivors face-findings which we shared in real time during the pandemic with local partners to inform their advocacy.

The impact of structural inequity, whether by race, income, ability, nationality or other reasons of marginalization have been brought to the surface. As Isabel Wilkerson so poignantly wrote in her groundbreaking analysis in "Caste", the fissures more visible now are deeply entrenched in our different histories, legal system. values, attitudes and behavior. We must challenge these inequities with clarity and a commitment to reparations. While each country must grapple with its own history of oppression and the impact of racism in their own communities, the BLM galvanized protests in over 60 countries and all but one continent.

In many parts of the world we see the growing trends of nationalism and religious- based fundamentalism that are used to embrace traditional ideas of women's subservient role to men-an expectation that women will stay at home do all the housework and child care, not pursue an education and obey their husbands. Lesbians and transgender women are thought to be threats to the family unit, subject to harassment, violence and sometimes arrest. The Advocates has learned firsthand from partners around the world who are confronting this backlash that is threatening their work, safety, and women's and human rights. We are working in coalition with human rights defenders from multiple countries to counter this backlash.

Girls are also at greater risk during the pandemic. Zimbabwe reports that an increasing number of girls are being forced into child marriages, more likely to become pregnant and, like their mothers, experience gender- based violence. UNESCO estimates that 11 million girls will not return to school after the pandemic, making them that more vulnerable and without the agency necessary to control their own lives. For more information on violence against the girl child, see The Advocates' StopVAW.org website.

Yet, women and girls rise to meet the needs of their communities and countries, providing innovative solutions to the crises facing us in 2021. In Afghan, a group of young women have developed innovative ventilators; in Thailand, another young woman created a national COVID-19 tracker; women chefs have galvanized those in the food industry to cook and deliver healthy meals to the homeless in the Brazilian favelas. The list goes on and on.

Women have been in the forefront of promoting peaceful solutions to conflict -conflict that has often included the rape and violation of women, the death of those in combat and the destruction of communities. The Soldiers Mother's Committee in Russia and Chechnya, or the Women of Liberia Mass Action for Peace founded by Leymah Gbowe or the 3 co-founders of Black Lives Matter have inspired all of us. And as we documented in our work with the Liberian Truth and Reconciliation Commission, women have a key role to play in the post-conflict and peacebuilding process.

In 2013, I traveled to Myanmar and met with one of the few women in Parliament. Like Ang San Suu Kyi, she had earlier been imprisoned because of her beliefs, but now was the leading AIDS prevention activist in the country. With the help of a translator, we raised a toast to the future of women leaders:  impending election of Suu Kyia and that of Hillary Clinton in 2015. History has since demonstrated that paths are neither easy nor predictable, but we cannot be deterred.

As we look around the world, we salute and embrace so many leaders like Prime Minister Jacinda Ardern in New Zealand, President Michelle Bachelet in Chile and Chancellor Angela Merkle in Germany. Today women are heads of states or governments in 23 countries. At last, the United States has elected Kamala Harris, our first Vice President who is a woman, biracial and in an interfaith marriage. As Harris notably exhorted, "I may be the first, but I will not be the last!"

Joan Kuriansky has volunteered with The Advocates For Human Rights for more than 20 years. In June 2020, she researched and prepared the AHR submission to the UN Special Rapporteur on Violence Against Women on the impact of COVID-19 on victim/ survivors in the District of Columbia, USA. The report identified the multiple challenges facing women who were isolated at home, looking to a legal system in transition to a virtual venue, had less access to counselors/advocates, were largely responsible for their children, no longer in school In 2019, all the while living with an abusive partner in an increasingly stressful time. Among other AHR activities, Joan researched and developed a report on the status of women's human rights in Croatia following an opportunity to meet with other stakeholders in Zagreb. The report was submitted jointly by AHR and the Autonomous Women's House Zagreb as a stakeholder's Report for the UN Human Rights Council's Universal Periodic Review of Croatia.

Joan brings her passion and expertise in her commitment to AHR, grounded in her experience as an attorney and executive director of several local and national organizations in the US addressing the rights of women and girls in the fields of economic security, health care, and violence. She is also an activist on women's rights on an international level.