The U.S. Returns to the UN Human Rights Council 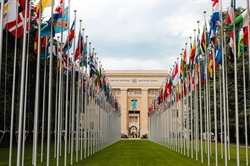 In its first major outing following its return to the UN Human Rights Council, the US delegation will participate on Wednesday, March 17, in an interactive debate on the outcome of the Council’s Universal Periodic Review of human rights in the US. Since the review took place in November of 2020, there’s been both a change of administration and a sea change in the US approach to the Council. Long before the review, the Trump administration had withdrawn the US from the Council, but it nevertheless participated in the Council’s US review.

As we noted back in November, the national report submitted by the Trump administration in advance of the review struck a rather defiant tone on some hot button issues. For example, in responding to recommendations from the previous cycle of the UPR about police violence and systemic racism, and anticipating an even greater focus on these issues in the current cycle, the US flatly rejected that systemic racism in US law enforcement is even a problem in need of solutions. By contrast, the Biden administration has readily admitted that systemic racism is a serious problem in US law enforcement, albeit while always carefully pointing out that the US is not alone in this.

After the recommendations of the other Council members were made orally at the review session, they were put into a written report, and the US began working on its response while former President Trump was still in office. Shortly after the change of administration, newly confirmed Secretary of State Antony Blinken announced that the US would resume its participation as an observer in the Human Rights Council and will run next year to regain its seat as a Council member. Earlier this month, the Biden administration submitted the US “addendum” to the report of the UPR working group, in which it indicated which of the recommendations made by other member countries it accepts, and therefore will work to implement, and which it does not accept. Many of the accepted recommendations dealt with the problem of police violence and the need to work to ensure that race is not a factor in police actions, but somewhat surprisingly, the US addendum did not support recommendations that referred expressly to systemic racism. How the US will reconcile the inconsistency between the statements of President Biden and Secretary Blinken acknowledging the problem of systemic racism with its failure to accept such recommendations remains to be seen at the upcoming Wednesday dialogue. The Advocates will be making an oral statement to the Council on police violence and systemic racism in the US on Thursday, March 18.

Other vitally important human rights issues were also raised by the recommendations received by the US, including several that were addressed in stakeholder reports and lobbying by The Advocates in advance of the review, including the death penalty, human trafficking, and the rights of immigrants. The written response of the US to those recommendations contains many hopeful signs, and we look forward to hearing these issues addressed by the US delegation on Wednesday.