Armed and Unaccountable, Federal Forces Use Tactics Honed at the Border against Protestors 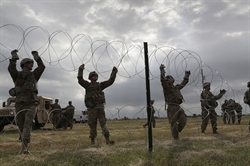 The deployment of anonymous armed federal agents, now identified as part of the Department of Homeland Security (DHS), in Portland has yielded shocking reports of arbitrary arrests, detention without charge, and short-term disappearances, in addition to injuries to protesters resulting from use of sub-lethal force and chemical agents. Garnering less attention, but no less troubling, on July 8, the Department of Justice launched Operation Legend and deployed federal forces under the guise of addressing “violent crime” in Kansas City, Missouri. Plans for more operations in other cities have been reported.

What explains the federal government’s apparently newfound zeal to engage in garden-variety policing of the kind usually reserved to local and state law enforcement?

Widespread protests around the United States, sparked by the extrajudicial execution of George Floyd by Minneapolis police officers, provided the administration with a pretext to flex its paramilitary muscle. In June, the president’s desire to “dominate” protestors and the attorney general’s promise to deploy “even greater law enforcement resources” in Washington made news.

Meanwhile, The New York Times reported a chilling statement by acting DHS secretary Chad Wolf that his agency “will not allow anarchists, disrupters and opportunists to exploit the ongoing civil unrest to loot and destroy our communities. While the department respects every American’s right to protest peacefully, violence and civil unrest will not be tolerated. We will control the situation and protect the American people and the homeland at any cost.” [emphasis added]

International human rights standards explicitly forbid defense of public safety “at any cost.” Certain human rights – including freedom from arbitrary detention or unacknowledged detentions and freedom of opinion – can never be waived, no matter how severe the state of emergency. As New York Times columnist Jamelle Bouie asks, “How can this be a job for Homeland Security?”

The DHS Rapid Deployment Teams followed an executive order directing federal agencies to send personnel to protect monuments, statues, and federal property during continuing protests against systemic racism and police brutality. The RDTs are reportedly “made up of officers from Customs and Border Protection, the Transportation Security Administration, the Coast Guard and Immigration and Customs Enforcement who back up the Federal Protective Service, which is already responsible for protecting federal property.”

By deploying DHS forces in Portland, the country is witness to abusive tactics long used against immigrants, border communities, and communities of color. While federal courts occasionally have reminded the Customs and Border Protection (CBP) that the border is not a “rights-free zone” (read Judge Donovan Frank’s 2018 opinion in a case brought by our colleagues at the ACLU), their effective jurisdiction has spread to operate freely within 100 miles of US land and water borders where approximately 63 percent of the US population resides. And even the extrajudicial execution of a teenager who was standing in Mexico at the time he was shot by a Border Patrol agent has been found to be acceptable. (DOJ investigators declined to prosecute after finding the agent did not violate CBP policy and the Supreme Court allowed the killer to evade civil liability through its overbroad qualified immunity doctrine).

Since its inception, DHS has run this rapidly expanding agency (CBP boasts more than 60,000 employees) with a dangerous mix of extraordinary power and little accountability. The agency operates with virtually no transparency, making it chronically difficult to get answers from CBP officials about policies, procedures, or practices. A 2014 report examining 809 complaints filed between January 2009 and January 2012 found:

For years it has been reported that U.S. Border Patrol agents routinely ignore the constitutional and other legal rights of both immigrants and U.S. citizens. More precisely, agents of the Border Patrol are known for regularly overstepping the boundaries of their authority by using excessive force, engaging in unlawful searches and seizures, making racially motivated arrests, detaining people under inhumane conditions, and removing people from the United States through the use of coercion and misinformation. [1]

CBP’s powers are extraordinary. What other federal agency sets up checkpoints for document inspection, engages in race-based traffic stops under color of law, insinuates themselves into routine law enforcement encounters as “interpreters,” and boards buses and trains demanding identity documents? These tactics are tailor-made for repression.

So it’s not surprising that Acting DHS Secretary Wolf said in a Fox News interview on July 21 that DHS agents are “having to go out and proactively arrest individuals.” After all, arresting people without probable cause is business-as-usual for his agency. (It is also unconstitutional. Harvard law professor Andrew Crespo breaks it down in a fabulous Twitter thread).

Perhaps most disturbing, however, is the recasting of ICE and CBP as “intelligence” rather than “law enforcement” agencies. Reported in February, the move threatens to make these forces even more impervious to accountability.

Human rights violations, like human rights themselves, are interconnected and interdependent. Our outrage needs to be too.

The same tactics refined at the border are now being deployed to “control anarchists,” according to Acting DHS Secretary Wolf (whose @DHS_Wolf twitter feed uses “anarchist” so frequently you would think he stopped reading his nativist history book at 1920). This is a potent example of how human rights abuses, when allowed to continue unchecked, create space for further repression affecting ever greater numbers of people, geographies, and issues.

Activists warning of the impact of criminalization and mass incarceration will see another tool in the toolbox of repression being used to hammer protestors in Portland: protecting private property from graffiti. That’s right. Graffiti. DHS has attempted to justify the tactics in Portland by pointing to dozens of episodes, including the defacement of federal property with graffiti. Proponents of the toxic “broken windows” policing strategy have long cast graffiti in the same terms reserved for gang affiliation and drug crime, justifying use of absurdly draconian felony charges against Black and brown communities. (For a powerful deep dive into graffiti and the impact of criminalization of urban artists check out the Scared Straight episode of the California Love podcast).

Not surprisingly, this deep-seated commitment to prioritize the protection of inanimate objects over the protection of people (especially Black and brown people) comes alongside Secretary of State Mike Pompeo’s “Commission on Unalienable Rights’” pronouncement that the founding fathers sought to protect private property above nearly everything but religious freedom (for Christians). Check out The Advocates’ blog post on the “Commission” here.

What’s unfolding in Portland has rightfully horrified many people as an extraordinary crackdown on First Amendment protected activity and a terrifying disregard for Fourth Amendment guarantees against unlawful search and seizure. Moms decked out in protective goggles and dads armed with leaf blowers have turned out in the streets.

But let’s be honest. Border communities have faced daily human rights violations committed by an unaccountable and armed paramilitary force patrolling a militarized border. Black artists have faced serious jail time for engaging in artistic expression without the protection of a studio or gallery.

Human rights violations, like human rights themselves, are interconnected and interdependent. When the headlines of federal forces in our communities shift away from the Portland protests, remember that BIPOC communities will remain directly and deliberately in the crosshairs. Our outrage needs to follow.

How can we take action?

Demand accountability and disinvestment. CBP’s annual budget is more than $18 billion, with an additional $10.4 billion for ICE, nearly doubling since 2014. (Meanwhile, CBP recently was found to have misappropriated emergency funds earmarked for “consumables and medical care” to address deplorable detention conditions,” spending the money on ATVs, boats, motorcycles, and other unrelated expenses.)

Document and report abuses. In addition to the Department of Homeland Security Office of Civil Rights and Civil Liberties, the UN Working Group on Arbitrary Detention and the UN Working Group on Enforced Disappearances and the UN Special Rapporteur on Extrajudicial, Summary or Arbitrary Executions each have special procedures for investigating human rights violations.

Stand in solidarity. Calls to #DefundPolice and #AbolishICE are more than hashtags. They represent insightful community-led movements to envision and achieve a new vision of safety at our border and in our communities that values the human rights of us all.

By Michele Garnett McKenzie, Deputy Director and Director of the Research, Education, and Advocacy team at The Advocates for Human Rights.

[1] American Immigration Council, "No Action Taken: Lack of CBP Accountability in Responding to Complaints of Abuse," 2014