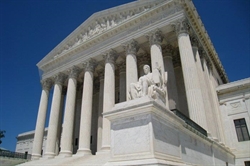 The U.S. Supreme Court on Monday struck down provisions in Oregon and Louisiana law that allow a jury to convict someone of a crime without reaching a unanimous verdict. Ramos v. Louisiana brings attention to the importance of aligning death penalty practices in the United States with international human rights standards. The Advocates for Human Rights, as a member of the World Coalition Against the Death Penalty, is opposed to the death penalty in all circumstances. But as a step toward abolition, it is important to examine the human rights standards that apply when a state allows the death penalty.

At first glance, Ramos might seem entirely irrelevant to international human rights law or the death penalty. The provisions in Oregon and Louisiana law that the Court struck down both had exceptions: for a defendant to be sentenced to death, the jury must decide the person's guilt unanimously.

Moreover, the Court's decision in Ramos is based on the Sixth Amendment right to a "trial by an impartial jury." Trial by jury is just one of several ways to determine whether a person accused of a crime is guilty, and international human rights standards do not dictate that courts must use a jury to determine a person's guilt. Article 14(1) of the International Covenant on Civil and Political Rights, for example, calls for "a fair and public hearing by a competent, independent and impartial tribunal established by law." Some countries ensure this right with a jury as finder of fact, while others task a judge to make factual determinations, and still others use a hybrid system with a professional judge alongside lay judges or jurors finding facts together.

But the unanimity exceptions for capital cases in Oregon and Louisiana law bring to mind the importance of international human rights standards that apply to the death penalty.

Non-unanimous jury verdicts in capital cases violate the United Nations' minimum safeguards applicable in death penalty cases. These safeguards, adopted in 1984, say that a person may be sentenced to death "only when the guilt of the person charged is based upon clear and convincing evidence leaving no room for an alternative explanation of the facts." If twelve jurors hear all the evidence in a case and, even after prolonged deliberations, one or two of those jurors do not think the defendant is guilty, then there must be a persuasive "alternative explanation of the facts."

These safeguards are consistent with one of the most persuasive arguments against the death penalty-the risk of wrongful convictions. Exonerees from organizations like Witness to Innocence provide powerful testimonies that the criminal justice system can reach unjust results. Requiring a unanimous jury doesn't ensure that the jury will reach a correct decision. Indeed, the 167 people who have been exonerated from death row since 1972 were likely all found guilty by unanimous juries. But the 1984 safeguards emphasize that when a person's life is on the line, the justice system must ensure that the legal process "gives all possible safeguards to ensure a fair trial."

Last year, the U.N. Human Rights Committee published a general comment relevant to the death penalty. (The Advocates made two written submissions to the Committee as it drafted the comment.) The Committee noted that violation of the fair trial rights in Article 14 of the ICCPR can render a death sentence arbitrary, in violation of Article 6 of the ICCPR. The Committee called on State Parties to the ICCPR to "take all feasible measures in order to avoid wrongful convictions in death penalty cases, to review procedural barriers to reconsideration of convictions and to re-examine past convictions on the basis of new evidence."

A unanimous jury requirement is just one component of the government's obligation to avoid wrongful convictions. Another important component is access to competent legal representation. You'll read more about that topic on this blog later this year. The theme for the 2020 World Day Against the Death Penalty-an event marked every year on October 10-is Access to Counsel: A Matter of Life or Death.

Click here to learn more about The Advocates work against the death penalty worldwide.

By Amy Bergquist, Senior Staff Attorney in The Advocates' International Justice Program. She represents The Advocates on the Steering Committee of the World Coalition Against the Death Penalty, where she is one of the Coalition's vice presidents.