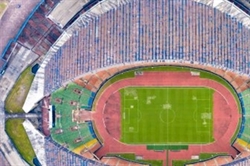 On April 16, 2018, five individuals landed unexpectedly at the airport in Casablanca, Morocco, looked around the terminal for an hour or so, and then left. The group was sent by FIFA to inspect Morocco’s airports, hotels, and soccer stadiums as part of the country’s bid to host the 2026 FIFA World Cup, the global soccer tournament held once every four years. Only Canada, Mexico, and USA had submitted a joint bid to rival Morocco’s, and initially the question was whether the small North African nation had the resources and basic infrastructure necessary to host such an enormous event. But, in the days since the task force’s arrival in Casablanca, FIFA’s attention has turned, appropriately, to Morocco’s record on human rights.

Today, The Advocates for Human Rights sent a letter to FIFA President Gianni Infantino alerting FIFA that Moroccan criminal law discriminates against women and does not guarantee a safe environment for all World Cup attendees regardless of gender. The Advocates’ letter calls upon FIFA to uphold its commitment to international human rights – particularly women’s rights to freedom from discrimination and violence – by declaring that, until Morocco’s discriminatory criminal laws are repealed and measures are taken to respond adequately to sexual violence, the country’s eligibility to host the 2026 World Cup is called into question.

Current Moroccan laws criminalize all sexual relations outside of marriage. Police are known to harass unmarried lovers, breaking into private homes in the middle of the night and arresting individuals on charges of adultery.

Further, Moroccan laws create significant barriers to justice for women who have been raped. For example, in cases of sexual assault and rape, Moroccan law continues to require that victims prove non-consent by showing actual physical injuries resulting from the act of violence, and ignores the act of violence itself. Moreover, rape victims are deterred from seeking help out of fear of prosecution for illicit sexual relations outside of marriage under articles 490 and 491 of the Moroccan Penal Code. And violence against women is a widespread problem in Morocco: 62.8 percent of women report some form of violence within a given one-year period; an estimated 23 percent of women experience sexual violence at some point in their lifetime.

The Advocates’ letter presses FIFA to further examine Morocco’s bid to host the 2026 FIFA World Cup and to engage in dialogue with national representatives toward solutions. Such discriminatory laws create disincentives to all fans – foreign and Moroccan – to attend World Cup matches and festivities. Moreover, the laws create disincentives to female fans in particular to attend because of the threat of gender-based violence. The resulting low attendance may have a direct, negative impact on the World Cup itself, both in ticket sales and in attendance at games and related World Cup events.

Other advocacy groups have noted that Moroccan criminal laws also discriminate on basis of sexual orientation. Morocco failed to disclose its anti-LGBT laws in its bidding materials, in violation of FIFA rules. In response, this week FIFA sent a second technical committee to Morocco to look into human rights concerns, in addition to infrastructure issues.

In 2017, FIFA adopted a new, landmark Human Rights Policy, while also creating a Human Rights Advisory Board to guide its implementation. Among other things, FIFA’s Human Rights Policy effectuates article 4 of FIFA Statutes, which prohibits discrimination of any kind, by requiring that future bids to host the FIFA World Cup are vetted against international human rights standards.

FIFA’s return to Morocco also suggests a sea change in FIFA policy and practice. In June, the 2018 FIFA World Cup will be held in Russia, a country known for anti-LGBT laws of its own, among other human rights concerns. Similarly, the 2022 FIFA World Cup will be held in Qatar, where there are serious concerns about labor trafficking in the country’s efforts to build the stadiums and other infrastructure necessary to host the event. Because of the overwhelming criticism from international human rights groups and others for its overt disregard for human rights abuses in connection to FIFA-sanctioned events, in 2015, FIFA engaged in a process to review and possibly overhaul its policies and business practices.

Whether that review has transformed the organization remains to be seen. But FIFA’s Human Rights Policy was adopted in the wake of that review, and such policy forms the basis for the added scrutiny over Morocco’s 2026 World Cup bid – clear evidence that the advocacy efforts of international human rights groups, like The Advocates for Human Rights, can leverage the private sector to shift national laws and public policy.

FIFA, like many private industries, believes that its product – soccer – has the power to change the world. At a March conference, FIFA President Infantino stated that the global sport has immense “strength” that can be used as “a force for good.” As The Advocates noted in today’s letter to President Infantino, although such statements carry great promise, to have meaning FIFA must act on them. The question is whether FIFA holds firm to its commitment to international human rights – particularly women’s rights to freedom from discrimination and violence – by engaging with Morocco’s national representatives to improve its World Cup bid. In turn, Morocco will have ample incentive to repeal its discriminatory laws and enact new protections for women.

Whether Morocco is awarded the 2026 FIFA World Cup will be decided by the FIFA Council on June 13, 2018.