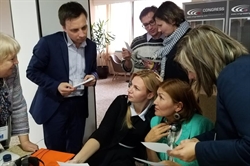 As we look back on The Advocates’ women’s human rights work in 2017 and the movement to hold accountable perpetrators of sexual harassment and assault, the word that comes to mind is strength. In the last year, we strengthened the capacity of women’s rights defenders, made life-saving recommendations for reforms, and strategized how the UN can become even better in achieving gender equality.

We continued to identify gaps in governments’ responses to violence against women so we can tell them how to make women’s lives safer. Last year, we released reports on domestic violence in Montenegro and Serbia, where they become tools to bring sweeping changes.

We also began building a multi-country cadre of women’s human rights defenders to use international mechanisms. By teaching 16 Russian-speaking lawyers how to leverage these remedies, we build their capacity to safeguard women’s rights against sexual harassment, trafficking, domestic violence, and sexual assault. This work is powerful and life-saving for the women in many countries with few realistic options for safety. One lawyer told us,

“With your help, I have started to believe that we can change our situation to the best.”

And, of course, we have continued our advocacy before the UN, holding countries to the highest standards of women’s rights, while expanding our lens to focus on the UN itself. After all, if the UN is going to lead on women’s human rights, it must lead by example. In the face of ongoing investigations of sexual harassment by senior UN figures, such scrutiny is long overdue.

As a core member of the UN Gender Network, we are reviewing the UN’s gender equality policies and will make recommendations for reform at a UN roundtable next month.

We will continue to build on our momentum through 2018. I hope you will join us at three exciting events:

Please join us in 2018 as we celebrate women’s human rights, and thank you for your support to make the world a better, safer place for women.

By Rosalyn Park, director of the Women’s Human Rights Program at The Advocates for Human Rights