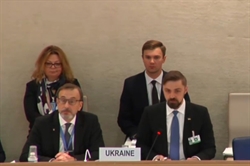 For the 3rd cycle Universal Periodic Review (UPR) of Ukraine, The Advocates for Human Rights submitted a stakeholder report in collaboration with Center “Women’s Perspectives,” a non-governmental agency based in Lviv, Ukraine. The report focused on the prevalence of domestic violence in Ukraine.

Domestic violence is a pervasive problem in Ukraine. In 2016, the Ministry of Social Policy recorded 96,143 complaints of domestic violence, and data indicate that the number of complaints has been on the rise by 10% per year. The legal system fails to adequately protect women, a problem exacerbated by ongoing political conflict. Ukraine has not yet created a specific crime of domestic violence, nor has it specifically defined gender-based violence in its laws. A package of laws to address violence against women passed a first hearing in Parliament in 2016, but was sent back to a working group over concerns the draft laws were harmful to traditional family values. Members of Parliament have asked the working group to remove references to “gender” and “sexual orientation” and to allow religious groups to sit on the Working Group. Ukraine has yet to ratify the Istanbul Convention on violence against women. Victim services remain insufficient and underfunded.

This post is the fourth in a series on The Advocates’ international advocacy. The series highlights The Advocates’ work with partners to bring human rights issues in multiple countries to the attention of the United Nations Human Rights Council through the Universal Periodic Review mechanism. Additional post in the series include: