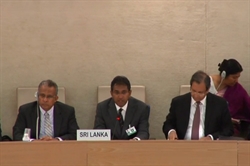 One recent example is Sri Lanka. The Advocates, in collaboration with The World Coalition, submitted a stakeholder report about the death penalty in Sri Lanka for consideration during the country’s third Universal Periodic Review (UPR) at the UN Human Rights Council.

Sri Lanka acknowledges itself as a de facto abolitionist state and carried out its last execution in 1976. Yet Sri Lankan courts continue to sentence defendants to death and the country’s constitution still authorizes the use of the death penalty. According to Amnesty International, in 2016 Sri Lankan courts sentenced at least 79 people to death and an estimated 1,000 prisoners were under sentence of death.

The public statements made by Sri Lanka were reinforced by the country’s increased openness to UPR recommendations. During its latest UPR on November 15th, 2017, Sri Lanka accepted three of thirteen recommendations made on the death penalty.

This post is the third in a series on The Advocates’ international advocacy. The series highlights The Advocates work with partners to bring human rights issues in multiple countries to the attention of the United Nations Human Rights Council through the Universal Periodic Review mechanism. Additional post in the series include: