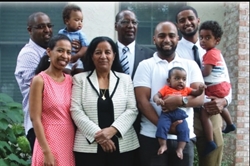 
Their four grown children are prospering and would make any parent proud. The oldest, a son, is an electrical engineer who is married with a young son of his own. Their daughter, second oldest, is a physician, and married with two little ones.Their third child is in law school, and the youngest is an athletic trainer aiming to get into physical therapy school.The couple desires what most parents want for their children to work hard, live a life imbued with values, pursue an education, gain rewarding employment, give back to community, and be happy. They are a testament to generations of refugees and immigrants who have built America.The father, Edossa Rumicho, had been the director of literacy outreach for the Ethiopian Evangelical Church Mekane Yesus in Ethiopia. The mother, Bekelech Dinsa, had been a nurse and midwife. The couple and their family are Oromo, the largest single ethnic group in Ethiopia. The Ethiopian government has targeted, systematically discriminated against, persecuted, and oppressed the Oromo for generations. "Being born an Oromo in Ethiopia is being born a criminal," Edossa said.In Ethiopia, Edossa held an elected leadership position in the Oromo Liberation Front (OLF), a political organization established to promote self-determination for the Oromo people against Abyssinian colonial rule. Like many, Edossa was hunted and spied on by the government for his political work.When, in 1992, Edossa traveled to Canada for a professional conference, it turned out to become a particularly perilous time for the Oromos. The OLF was forced to with-draw from the Transitional Government of Ethiopia (TGE)that had overthrown the Communist government the previous year. While Edossa was in Canada, the TGE began rounding up Oromo people and putting them in prison. "It's impossible for the human mind to think what they do to people," he described. "They kill people like animals, and they torture people in jails that are nothing but horror chambers."Edossa's brother called him, telling him that because of this OLF role, it was too dangerous for him to return. Edossa was torn, grieving for and worrying about Bekelech and their four young children, ranging in ages from 2-1/2months to 11 years. With limited options and thinking he could eventually re-turn home, he entered the United States six months later,joining relatives living in Minnesota. Five months passed,and with hopes dashed, Edossa made his way to The Advocates for Human Rights and, in turn, to volunteer attorneys Chris Bercaw, of the Dorsey law firm, and Gail Engstrom. "I took over the case Gail started," said Bercaw. "It was my very first asylum case, and it was nerve racking because a man's life hung in the balance."Even though Edossa's asylum application was denied, Bercaw ultimately won asylum for his client during the immigration process to remove Edossa from the United States to send him back to Ethiopia.

For Edossa, asylum was a bright spot in what was other wise a lonely, worrisome existence. "My life was empty me without my children," he said. "When I saw people walk down the street with children, tears came to my eyes.Without my children, I was reduced to nothing."Talking on the phone and seeing photos and videos were poor substitutes. Long distance phone calls cost him $500a month, a steep price for his security guard earnings. "I remember my dad calling and, as a young child, the over-riding thought I had was, 'Will he ever come back?'" said Kaleb Rumicho, who was four when his father left. "While we were separated from my dad, I remember bombs going off, having to hide under the bed."Once Edossa gained asylum, Bercaw set out to bring Bekelech and the children to the United States. Five years from when Edossa applied for asylum,the family was reunited. "I started weeping because I never thought I'd see my children again," Edossa recounted. The children were 16, 13, 9, and 4."Seeing my dad was amazing; it had been so long since we had seen him," Kaleb said. "I'll always remember witnessing my dad's first interaction with my young brother who was just an infant when my family was separated.""Edossa's case is one of the most powerful cases I've worked on," Bercaw said. "This is the way it's supposed to be: A refugee family coming to the United States to be safe and to build a better life for himself or herself and for future generations. I marvel at having a hand in this. I'm thankful."The Rumicho family is more than an American success story. They also illustrate a refugee or immigrant's bifurcated life. "Oromo people continue to live in fear in Ethiopia; they are pushed off their lands and killed," Edossa said."Most refugees and immigrants do not want to leave their homes and countries," he explained. "I lived as a foreigner in Ethiopia; in my own country, I lived in fear. Here, I have never felt like a foreigner. But my heart is always there."Edossa is grateful. "America is a beautiful country. I always bless this country."