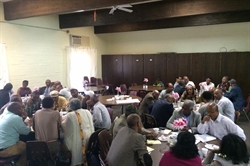 This is the third in the “Welcome Home” blog series featuring articles about groups that represent diaspora communities in Minnesota. Read additional posts here.

Minnesota is home to not only the largest Oromo community in the United States, but also the largest population of Oromo people outside of Ethiopia. The Oromo people have arrived in Minnesota over the past 30 years as a direct result of political persecution and other human rights abuses in Ethiopia. Across the diaspora, Oromos continue to actively engage with the politics of their country of origin and encourage the governments of their adopted countries, including the United States, to apply pressure on Ethiopia to improve its human rights record.

One such organization is the Peace and Justice Committee of Our Redeemer Oromo Evangelical Church in Minneapolis, founded in part by Oromo diaspora member Samuel Berhanu. Samuel and others in his organization are dedicated to introducing Minnesotans to the Oromo people and educating them about the human rights violations Oromos experience at the hands of the Ethiopian government.

History of Persecution by the Ethiopian Government

Despite being the largest ethnic group in Ethiopia, the Oromo people face discrimination based on their ethnicity as well as their real or perceived political opinion. Reports from civil society in Ethiopia reveal the government’s alarming disregard for civil and political rights. These reports include accounts of extrajudicial killings, torture, arbitrary arrests, detention without formal charges, prolonged incommunicado detention, inhumane detention conditions, surveillance of government critics, and pressure on the judiciary to rule in the government’s favor. The government’s repressive tactics have stifled political dissent, undermined the independence of the judiciary, and weakened civil society. [The Advocates for Human Rights documented these human rights abuses in the report Human Rights in Ethiopia: Through the Eyes of the Oromo Diaspora, as well as in reports submitted to the African Commission on Human and Peoples’ Rights; the UN Committee on the Rights of the Child; the UN Committee on the Rights of Persona with Disabilities; and the UN Human Rights Council.]

Samuel and other members of the diaspora are working toward changing the United States’ approach to the human rights violations occurring in Ethiopia. The Peace and Justice Committee originally formed as part of the congregation of Our Redeemer Oromo Evangelical Church with the goal of influencing the Ethiopian government by appealing to the Western governments. The Peace and Justice Committee has helped build the capacity of the Oromo community to set priorities and engage in advocacy about human rights in Ethiopia.

The Committee worked with The Advocates’ International Justice Program staff attorney Amy Bergquist to organize a two-hour workshop attended by over 50 members of the congregation, as well as other concerned Oromos. At the workshop, participants identified priority issues and explored the different stakeholders who have the power to improve the human rights situation on the ground in Ethiopia. They then mapped out the people and organizations that influence those stakeholders to help Oromos in the diaspora better target their advocacy efforts.

Facing the challenges ahead

One of the obstacles facing the Peace and Justice Committee is successfully bringing together differing political opinions within the Oromo community. While the diaspora community largely seeks to end the human rights violations in Ethiopia, members disagree on the proper means of achieving that end. Some Oromos seek to work with the Ethiopian government, while others believe that succession is the only solution. Samuel makes a distinction between the role of the diaspora and the role of Oromos who remain in Ethiopia, explaining that at the end of the day, it is up to the people currently in Ethiopia to decide which approach is best. Samuel believes that their role as Oromos in the diaspora should be to provide a voice for Oromos remaining in Ethiopia, appealing to the West to exert pressure internationally.

Like other diaspora community organizations, the biggest obstacle is that members are trying to juggle work, family life, and the importance of the cause. Samuel does not seem to mind the burden, explaining that,

God brought me here not to just live my own selfish life . . . I have to think of those who can’t make a voice for themselves.

Volunteer Opportunities: The Peace and Justice Committee along with United Oromo Voice are currently seeking volunteers to assist with their projects and advocacy work. United Oromo Voice needs short-term and long-term volunteers to help with projects including community outreach, diplomacy, advocacy, media, and writing letters to government officials. If you would like to get involved, contact Samuel Berhanu at samueelb@gmail.com.

Learn More: To learn more about human rights violations against the Oromo people in Ethiopia, read:

Oromo Protests One Year On: Looking Back; Looking Forward;

Building Momentum in Geneva with the Oromo Diaspora;

By April Will, a second-year J.D. student (class of 2019) at the University of Minnesota Law School. She was a 2017 summer intern with The Advocates' International Justice Program.

This is the third in the "Welcome Home" blog series featuring articles about groups that represent diaspora communities in Minnesota. The first blog posts highlighted the contributions of the Karen Organization of Minnesota and the United Cambodian Association of Minnesota.