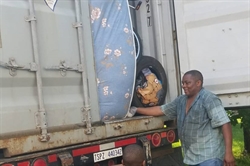 Minnesota is home to a wide variety of immigrants who fled violence and oppression in their home countries, but some groups are better known than others. Roger Akembom, who has volunteered for The Advocates, wants to draw attention to some residents who have attracted little political or media attention: his fellow English-speakers from Cameroon, in central western Africa.

Cameroon is a predominantly French-speaking country whose government, according to human-rights watchdogs, has committed serious abuses against residents of the former Southern Cameroons, two Anglophone regions that comprise about 20 percent of the population. These include forced disappearances, arbitrary detentions, mass arrests, excessive force by security services, bans on public meetings, and periodic government restrictions on internet access.

Akembom, whose father was a political prisoner, arrived in the U.S. about 17 years ago and won asylum. He says he is among more than 5,000 English-speaking Cameroonians who have settled in Minnesota. But people here are more familiar with larger populations like the Somalis, he says: "There are other immigrant groups like mine. We are facing the same issues."

He and other Anglophone Cameroonians have been working to raise awareness among policymakers and the public about the dire situation facing their compatriots. One area of deep concern: the tens of thousands of people who have fled to Nigeria to escape military crackdowns. Those escalated last Oct. 1, when Anglophones staged protests about their marginalization in society and activists declared independence for a state they call Ambazonia. Security forces killed more than 17 protesters, according to Amnesty International. (The government argues it needs to take strong action to fight "terrorists" who are waging an armed insurrection and have killed members of security forces.)

Akembum says the refugees need food, medicine, clothing, hygiene products, and money to pay for hospital care. Minnesota Cameroonians have just launched a new nonprofit, Partners in Hope for Southern Cameroons Refugees (PHOSCAR), to ship goods and pay for services at Holy Family Catholic Hospital, in Ikom, Nigeria. Many of the refugees have no money, Okembuom says, and "this is a new country to them; they don't have transferable skills."

PHOSCAR will work with a nonprofit that is on the ground in Nigeria. A group called The Southern Cameroons Ambazonia Women of Minnesota raised about $11,000 for the refugees at a fundraising gala last month. For more information about PHOSCAR, email info@phoscarelief.org.

French speakers in Cameroon are also victims of human-rights abuses by the government of Paul Biya, who has held power for 35 years. The Advocates has helped 87 Cameroonian clients in the past 10 years with asylum claims. In 2017, it accepted 13 cases, the highest number in any given year over the past decade, says Sarah Brenes, Director of the Refugee and Immigrant Program. While she didn't have hard numbers, she believes the majority of the claims have come from Anglophones.

Akembum says a major problem for Cameroonian immigrants is integrating into society. Many are highly educated, he says, but have trouble finding work to match their qualifications. He cites himself as an example: he earned a master's degree in public policy at St. Thomas University but is working at the post office.

Meanwhile, he is working with other members of the Cameroonian diaspora in the United States who advocate independence for the English-speaking Northwest and Southwest Regions, which activists call by the historical name "Southern Cameroons." They argue that option was wrongfully denied to Anglophones when Cameroon became independent from France and the United Kingdom in the 1960s. Anglophone representatives ended up negotiating a federalist ystem that was supposed to grant them a large degree of autonomy, but over the years the central government has consolidated power.

For more information about that history, see "Cameroon's Anglophone Crisis at the Crossroads" by the International Crisis Group.

By Suzanne Perry, a volunteer with The Advocates for Human Rights

This article is part of the "Welcome Home" blog series featuring articles about groups that represent diaspora communities in Minnesota. The first blog posts highlighted the contributions of the Karen Organization of Minnesota, the United Cambodian Association of Minnesota, and the Oromo Peace and Justice Committee.  If you would like to tell your story, please contact Amy Bergquist at abergquist@advrights.org.