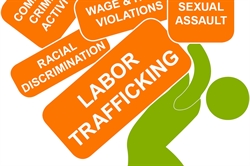 The Advocates supports revisions to Minnesota Statute 609.281 that will make the law more effective in holding people accountable for the crime of labor trafficking. H.F. 4078 makes important clarifications to existing statute.

Watch testimony by The Advocates' Senior Researcher Madeline Lohman at a hearing on March 8, 2022.

Labor trafficking is a serious crime affecting Minnesotans of all backgrounds.

Labor trafficking is when an individual uses control and manipulation to get labor, work, or services from the victim and the victim believes they are unable to leave or stop. The Advocates for Human Rights has interviewed people in every region of the state who have encountered labor trafficking victims in a wide variety of industries, ranging from agricultural workers on temporary visas to U.S. citizens selling magazines door-to-door.

Minnesota passed its current labor trafficking law in 2005, but it is difficult to use. There have been only three labor trafficking cases charged under MN 609.282 since it was adopted in 2005.?HF 4078 addresses these shortcomings, removing confusing language around the "status and condition of a debtor," replacing "blackmail" with "reputational harm," and providing context to "use or abuse of a legal process" - a term otherwise undefined under Minnesota law.

HF 4078 brings Minnesota law into conformity with other states.?

Because Minnesota was one of the first states to pass human trafficking legislation, the statute did not have many models to draw on. These revisions use language and concepts successfully tested in other states to ensure Minnesotans enjoy the full range of anti-trafficking protections.

Increased enforcement and prosecution of crimes falls unequally on people of color and immigrants, the same populations at greatest risk of labor trafficking. The Advocates supports protecting those most vulnerable to exploitation and trafficking through improving Minnesota's labor trafficking statute but urges robust monitoring and oversight of the impact of these changes to ensure the law does not inadvertently increase racial disparities in criminal justice.