“I think I will go mad here”: Putting a Face on Immigration Detention 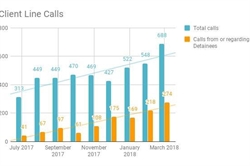 The first week of March was eerily calm for me.

As the person at The Advocates for Human Rights in charge of our client intake, one of my primary responsibilities is monitoring our client line, a phone line open from 9AM - 5PM Monday through Friday where we get calls from people seeking help.

Normally we get somewhere between 20 and 30 calls on a given work day, which might be a 5-minute referral or a 40+ minute intake interview - certainly enough to keep me and our crew of undergraduate interns busy. And yet, the first week of March, the calls seemed inexplicably less frequent and less pressing.

The twist? We received a letter from an inmate informing us that the phone system at Sherburne County Jail had not been working properly for several days, and dozens of people detained by immigration had been unable to reach us. Once we contacted the jail and got the problem resolved, our call volume immediately jumped back up again - and kept rising.

You see, over the past year, The Advocates' client line has been getting an increasing number of calls of all types, but especially from detainees. In July 2017, we received 41 calls from detainees. In March 2018, received 274. The months in between show a near-linear upward progression.

Our increase in calls is really no surprise when you look at current trends in ICE detention. The Trump administration has made concerted efforts to expand its arrest and detention capacity. The bottom line? More people are getting detained, and those who are detained are staying in detention longer. It's to the point where facilities are rapidly running out of beds. As NPR reported last fall, "ICE reports the average daily population in its detention facilities was a little more than 38,000 for the 2017 fiscal year. The president's 2018 budget plan requests an increase of $1.2 billion in funding for detention beds, to support an average population of over 48,000 adults."

The demographic of detainees is also changing. According to ICE data recently obtained by the National Immigrant Justice Center, more than half of the daily population in the first month of FY 2018 were marked as "non-criminal," seen as posing "no threat," while a mere 15% were classified as high threats, with violent criminal histories. Further, a recent report from the American Immigration Lawyers Association finds that from FY 2016 to 2017, arrests of immigrants with criminal convictions has increased a notable 12%, while arrests of people with no criminal convictions has increased a whopping 146%.

At The Advocates for Human Rights, these statistical trends are translated into conversations with individuals. People in ICE detention call for a variety of reasons. Sometimes they will ask for country conditions research needed to apply for asylum, or pro se (legalese for "DIY") information for a particular application. Still others need contact information for miscellaneous institutions as they try to collect documentation from detention to support their case.

Sometimes you can tell they just want to talk to someone about what they're going through. One inmate asked for help to request a new copy of his documents: he'd lent a copy of a motion he filed to a fellow inmate to use as a model - then that friend was woken and deported at 3AM, taking the man's papers with him. Some report medical issues, threats from fellow inmates, or being sent to solitary after raising a complaint.

There's a feeling of desolation such that even people with viable claims for legal relief consider giving up. One detainee, who had been denied ibuprofen for recurring headaches, commented, "I won't even resist deportation if I'm ordered - I just want to be able to live a decent life, you know?"

In another conversation, a man commented, "I feel like I'm losing my mind [...] I think I will go mad here."

Of course, the most frequent request from detainees on the client line is legal representation. Detention's most devastating consequence is that it limits vulnerable immigrants' already limited access to legal counsel. This makes the work of The Advocates, especially through The Minnesota Detention Project, more valuable day by day.

Not an attorney? Not a problem. Here are three concrete ways you too can make an impact:

1) Help us monitor Immigration Proceedings through The Court Observer Project.

2) Sign up as an interpreter to facilitate attorney meetings with detained immigrants.

3) Donate to The Advocates for Human Rights, so that when calls pour in on Client Line, we cannot not only answer, but respond.
-

For my fellow research enthusiasts, here are links to more numbers and analysis of trends in immigration detention:

By Rosie La Puma, Program Assistant in the Refugee & Immigrant program at The Advocates for Human Rights